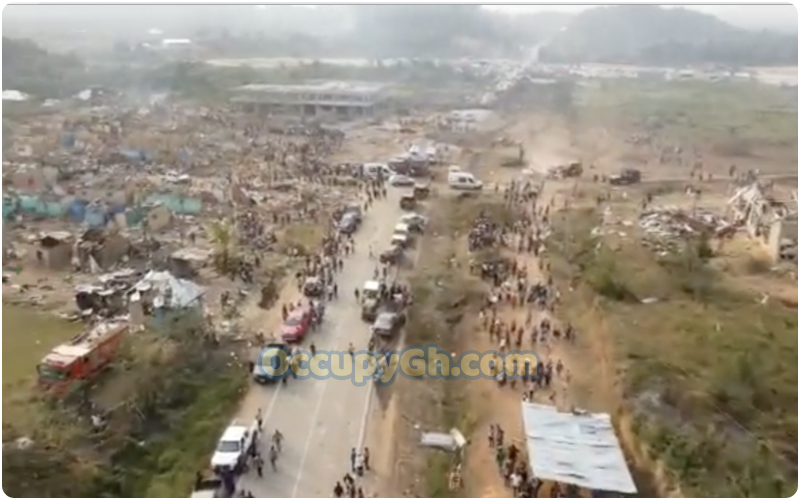 An eye-witness of the Bogoso-Apiate explosion has recounted the sad events leading to the explosion and how it happened.

The Bogoso-Apiate explosion saw about 17 individuals losing their lives with fifty-seven victims of the explosion being sent to three different health facilities in the Western Region.

The explosion was caused by a truck belonging to a mining service contractor MAXAM that was involved in a collision causing an explosion in the community.

The truck carrying the explosive was from Bogoso heading towards Kinross, a mining company in Chirano in the Western North Region, 140 kilometers away from the explosion site.

According to eyewitnesses who spoke to GhanaWeb’s Western Regional Correspondent, Thomas Tetteh, a sprinter bus collided with a motorbike at Apiate and as result, the motor got trapped under the truck.

The truck dragged which dragged the motor on the road for some few meters, caught fire, and extended to a nearby ECG transformer which also caught fire.

While the fire was blazing, the truck driver knowing the danger the fire poses to the people and the community due to the explosive in the truck warned people around to go far away from the fire scene, but people were busily taking pictures and videos of the blazing fire, while the driver fled.

At once the explosives exploded and the truck got blasted into pieces beyond recognition. The vibration from the explosion was so hard like an earthquake, bringing all houses in the community down killing about seventeen and injuring an unknown number.

The location of the truck on the road where the explosion happened has caved in about ten feet down, causing huge vehicular traffic because cars from Bogoso could not cross to Bawdie and vice versa. Due to this, a bypass has been created, to ease traffic.