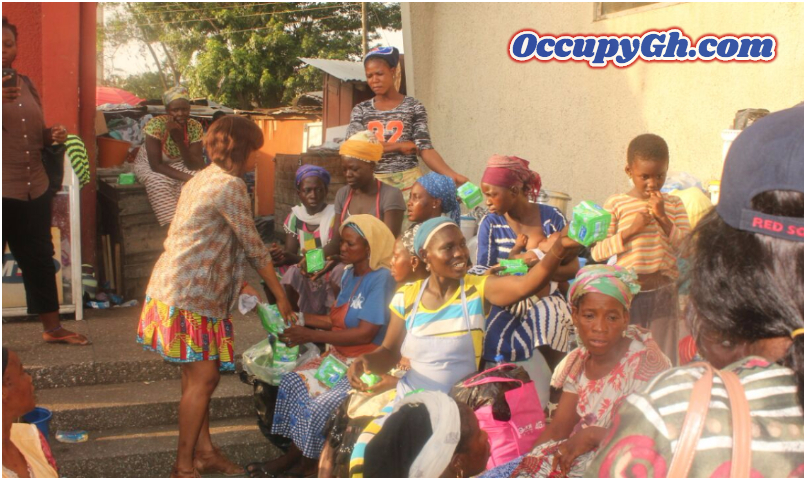 Two persons were injured and had to seek hospital treatment when a fight broke out among some female head porters, better known as kayayei, at a programme to donate items to them on Easter Monday.

The Neskael Corporate Show, led by businesswoman Kous Louanges Mang, had gone to Darkuman in Accra to make a presentation of clothes, shoes, food and some chairs to a group of kayayei.

Since the porters did not have an executive body to receive the items, the Neskael officials decided to share the items directly to those present.

“We went out there to help 100 women. The distribution started smoothly, but then, more and more kayayei kept coming in till there were over 200 of them,” she said.

“Sensing everyone might not get some of the items, they grew impatient and pounced on us. They tore at one another and fell over in the struggle to grab something and go.”

The Neskael official said it was a shocking experience as they were violently shoved aside by the kayayei and it became an issue of each one for herself.

According to her, it was a chaotic scene as the women jostled to grab the mini bags of rice, shoes and dresses for themselves. Those injured had their hospital bills settled by Neskael Corporate Show.

“Somehow, it showed how desperate people are for basic needs and better living conditions.

“I realised they were impatient because they were seeing the items and did not want to miss out on getting something to take away.”

The Neskael Corporate Show is an annual fashion event that targets promoting Ghanaian and African heritage in the corporate world through fashion.

It also aims at fostering networking opportunities among companies, creating employment, promoting made-in Ghana services and getting people to patronise African and Ghanaian clothing every day of the week.

Kous Louanges Mang, a Congolese-born Ghanaian, said she was moved to support the kayayei when she was driving through Darkuman and saw one of them bathing her baby by the road.

She later encountered another with her baby in the same area and made enquiries about them.

“So many questions flooded my mind and I felt moved to help.

“I knew there were kayayei in the system who had no proper sleeping places and other problems but that was the first time it struck me to lend a helping hand,” she said.

She said though the incident was traumatising, she would organise and go back there again with some more help for the kayayei.

She appealed to others capable of helping the women to also step up with whatever they could offer.

“Most of them sleep outside and you see their babies all over the place. Some of us live in our comfort zones and think things are fine for everyone but that’s not the case,” she noted.