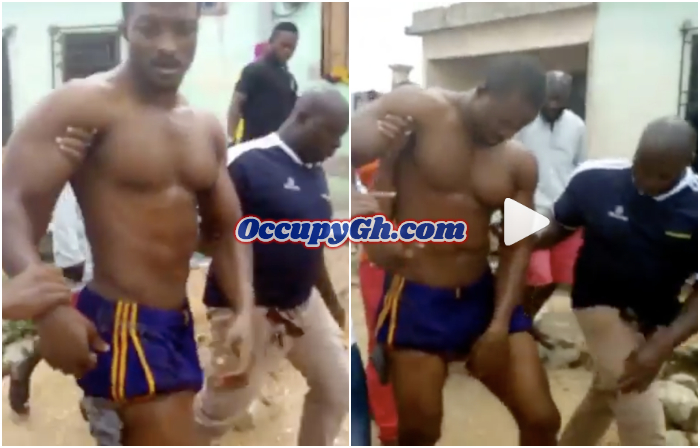 Some men believed to be relatives and friends of the man who was killed at the National Democratic Congress (NDC) party’s office in Kumasi during a shooting in February have attacked a man in a suspected reprisal attack. (Video below)

The victim is currently at the Komfo Anokye Teaching Hospital after sustaining multiple stab wounds.

Suleman Hussein, also known as Akon, was declared wanted by police for his involvement in the shooting incident which claimed the life of 34-year old Abdul Wasiu Iddris.

The angry youth on Thursday Afternoon besieged the residence of victim at Kenyasi-Abirem to demand his whereabouts from his family.

According to suspect’s sister, the youth numbering about 20 broke into his brother’s room and stabbed him multiple times with knives.

The family reported the incident to the police who later came to his rescue and succeeded in dispersing the youth.

The suspect’s sister, Samira Hussein told Citi News the men surrounded her home and searched her’s and her mother’s rooms.

“They took a brick and they broke the door and they entered, and my brother was sitting his sofa. One of the guys just stabbed him on his thigh with the knife. He stabbed him too deeply. One of the too use scissors to stab him at his back.”

She started screaming for help but one of the assailants fired a warning shot.

After the stabbing, she said they also “beat my brother mercilessly.”

The shooting incident in February happened when the National Chairman of the party, Samuel Ofosu Ampofo, the General Secretary, Johnson Asiedu Nketia, and the Regional Executive Committee met at the office to iron out issues between both factions.

Police have said four alleged members of pro-National Democratic Congress group, the Hawks, are suspected to be behind the attack at the party’s Ashanti Regional office in Kumasi that left one dead and one other injured.