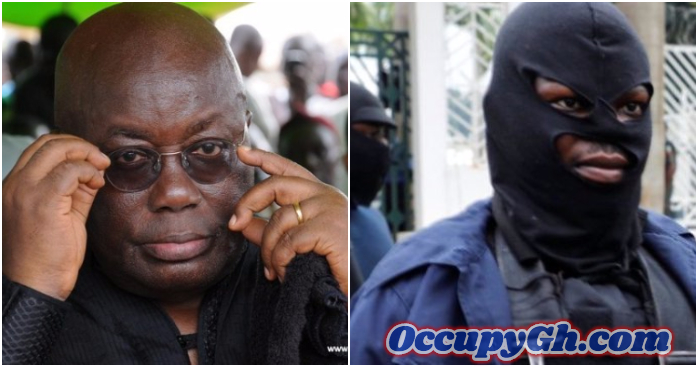 The governing party of the day has dissociated itself from a militia group called De-Eye, which is alleged to be affiliated to the party. (Video below)

In a statement signed by Mr Yaw Buaben Asamoa, Director of Communication for the party, the NPP said it has no connection to the militia group.

The statement comes on the heels of an exposé by investigative journalist Manasseh Azure Awuni on how the Osu Castle, a former seat of government, has become a training ground for a pro-government militia group called De-Eye.

The Commission of Inquiry into the Ayawaso West Wuogon by-election violence also holds its sittings at the castle.

The same venue is where, according to the exposé, De-Eye militia group has been operating since the NPP won power in the December 2016 elections.

Based on the exposé, the Minority in parliament has called on President Nana Addo Dankwa Akufo-Addo to resign.

Reacting to the documentary, the NPP’s statement signed by Mr Yaw Buaben Asamoa, Director of Communication for the party, said: “The NPP has watched with keen interest the news commentary put together by journalist Manasseh Azure and aired on the Joy News Channel in the evening of 7 March 2019.

“Whilst any effort at helping rid the country of politically-related violence is welcome and is to be commended, the NPP wishes to state UNEQUIVOCALLY FOR THE RECORDS that it has no connection to the purported group shown in the documentary.

“The NPP has not established any such group and is neither affiliated to nor supports one.

“However, it is significant that in seeking to make a point about militias or vigilantes, the news commentary makes obvious and extensive resort to footage from the ongoing public inquest into the violence-related events of the Ayawaso West Wuogon by-election. Nowhere in the footage shown is the subject persons or specifically identified group seen or connected to any violent activities.

“In the event, the NPP believes that given President Akufo-Addo’s open and public commitment and determination to uprooting the menace of politically-related violence, the political parties and, indeed, civil society at large, especially the media, have a responsibility to confront the issue candidly, without preconditions. Media commentary ought to give even more impetus to the president’s demonstrated and undoubted will and purpose of facilitating and securing the participation of the two major political parties in constructive dialogue.

“The NPP urges its counterpart, the NDC, to emulate the president’s sincerity in demanding that the parties go into talks and to do so aided by any inputs available from diverse sources.

“That way, the NPP believes that the wider public can participate in resolving the vexed question of politically-related violence once and for all.”