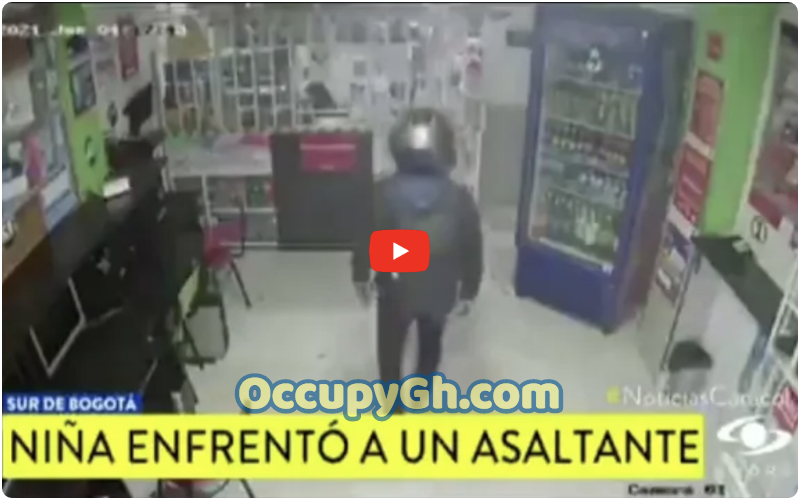 VIDEO: 14-Year-Old Girl Fights Robbers With Machete To Protect Her Mom From Them

A 14-year-old girl has fought a clique of armed-robbers with a machete who went into a shop and threatened and steal from her mum.

According to details privy to OccupyGh.com, the incident took place in the neighborhood of Rafael Uribe Uribe in Bogota, the capital city of Colombia, on Thursday, February 4, when a biker stopped by a stationery shop and forced entry at 4 am.

The owner’s two daughters – aged two and 14 – were inside the premises at the time of the attempted raid. CCTV footage inside the shop shows a man dressed in a black outfit and wearing a black helmet, walking into the back of the shop where the cash register is at. The brave teenage girl is seen confronting the robber as she threatens him to back off with a machete. She brandishes the blade in the air and pushes the man out to the front of the shop.

Another robber appears to step in to help out, but she chased them away and the duo fled the scene on their motorbikes. According to the report, the suspects shot the girl’s mother when they left the shop.

The mum was treated at a hospital with non-life-threatening injuries. The mum told local broadcaster Noticias Caracol that she tried to block the robber’s path by standing in front of the entrance gate but was unsuccessful.

“While I was pushing him, she was wielding the machete at him and he was backing away,” the mum said. The girl added that “it is neither the first nor the second time” that they have tried to rob her mother’s shop. “I already had it in my head that if anything happened,” the girl said. “I would take the machete and hit them.”

In this article:Colombia, Crime, USA, Viral