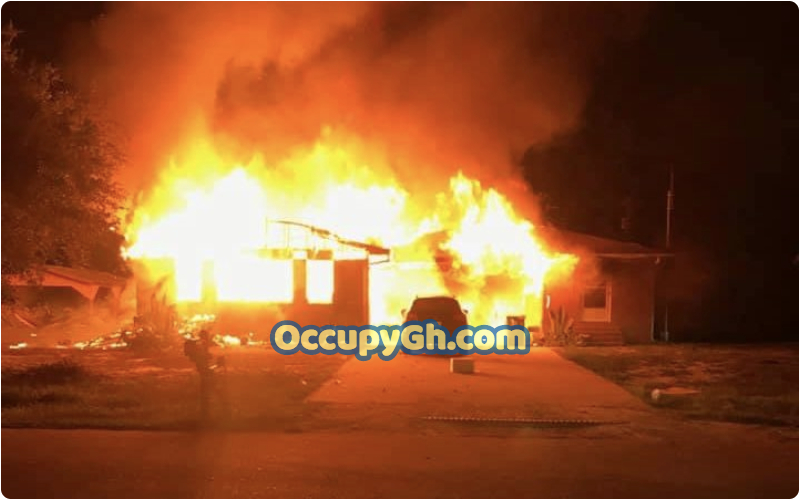 An 18-year-old girl has reportedly set her boyfriend’s house on fire, severely burning her lover.

According to the details privy to OccupyGh.com, the sad incident happened at Zaki Biam in the Wadata area of Makurdi, Benue State.

A neighbor of the victim, who did not want his name in print, explained that the lovebirds had been together for over two years and were planning to get married to each other.

The neighbor added that the victim, who was identified as Chidimma Omah, had a misunderstanding with the girl before the incident.

The neighbor stated, “The two lovebirds have been having misunderstandings. But around 2 am today (Monday), we heard a loud noise, which woke people up and we later discovered that a house was burning.

“It was later that we gathered that a girl, who had a misunderstanding with her boyfriend, decided to punish him.

“As of now, we cannot say specifically what the misunderstanding was about, but by the time we got to the scene of the incident, the young man was severely burnt and had to be rushed to the hospital.”

Our correspondent learned that neighbors rescued the young man and rushed him to the Federal Medical Centre in Makurdi for treatment.

Anene said the teenage girl poured petrol on the victim’s one-room apartment before setting it on fire.

The PPRO added that the girl had been arrested and was in police custody.

Anene stated, “We don’t know yet why she did that. We have yet to question her, but I can confirm that she has been arrested and is in our custody.

“The incident happened around 2 am today (Monday) on Zaki Biam Street in Wadata. We will let you know the details.”