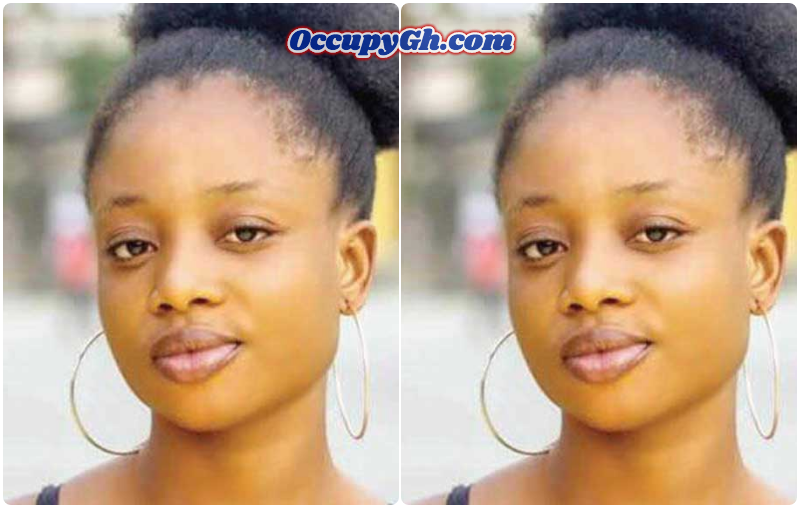 A beautiful Nigerian young lady identified as Kenile Nwabuzor has committed suicide after her boyfriend of two years agreed to her breakup request. The young man has been identified only as David and they called off the relationship on 11th April 2019.

According to David, Kenile Nwabuzor has always been depressed since he met her. She was mourning her mother who had just died when they met but knowing her conditions, he understood her and stood by her side throughout her days.

But when Kenile Nwabuzor again told him she was no more interested in the relationship (David revealed it’s not the first, she always call it off and they get back together when she feels okay), he finally accepted. Only for Kenile Nwabuzor to send him a text that she will kill herself because he does not love him anymore.

“She was my girlfriend and I loved her so much. We started dating each other about two years ago. She was not that literate, but I told her it didn’t matter. When we met, she was in distress. Her mother just died then and she was living alone. She said she could not live without her mother. Her brothers are based in Ghana, but they usually sent her money,” David told local media.

“She told me she finished secondary school, but I don’t think so. I really wanted to help her improve on her education. She easily got angry and if she had a disagreement with someone, she might not talk to that person again for years. As our relationship continued, I tried to correct her. I persuaded her to be going to church and bought a Bible for her. We usually had disagreements over petty issues.

“If we had a misunderstanding, I could be in her house for hours begging her and she would not say anything. If I decided to go, that would be another fight. At times, the misunderstanding would last for days.

“Because of the nature of my job, I have girls around me. She would be complaining that I was going out with them. I tried to tell her that she needed to trust me. I also saw boys around her because she was beautiful, yet I trusted her.”

“Recently, she said I didn’t love her again. She changed her phone’s password to deny me access to her phone. She accused me of sleeping with women. It was true many ladies wanted me to ask them out, but I ignored them” he added.

According to David, Kenile Nwabuzor called him severally but he missed the calls. He called back but was met with insults so he ended the call.

“She sent me text messages, but I didn’t reply. On Tuesday, I went to her house to return the charger she lent me and when I was about to leave, she returned all the things I had bought for her. That night, she sent a text message to me, saying that I had stopped loving her since December 2018 when we had fun at different places. She said she was no longer interested in the relationship.

“In my reply, I told her she was free to find her peace anywhere else. On Wednesday morning, I thought about everything again. I knew she was depressed and I had been the person encouraging her. I sent her another message, begging her. Most times, she would be the one to say she was not interested in the relationship, yet she would be crying. I was always the one saying sorry.

“That Thursday, she came to our house for the first time and met with my parents. That was the day my father knew her as my girlfriend. She reported me to him and said she was no longer interested in the relationship. My father sought my opinion and I said I didn’t have any comment.

“She started crying. She called one of her brothers and told him she was coming to Ghana. My father is a clergyman. He tried to counsel her. As my father was talking to her, she was crying. At a point, she stood up and left. Afterward, I left for my workplace.”

But Kenile Nwabuzor sent him a message which read: “You want to kill me; I will help you kill myself. Thank you for making my life a hell.”. Knowing how depressed she was, he jumped on a motor and raced to her house but found her hanging on her ceiling.

“On getting there, I peeped from her window and saw her body dangling on a rope tied to the ceiling. I shouted and barged into her room. Her neighbors helped me lose the rope while I brought her down. She was already heavy, but I was not feeling the weight.”

“I was not in my right senses again. I took her on a motorcycle to a nearby hospital. She was referred to Randle General Hospital. A doctor confirmed her dead on arrival. I called her brother and relations. The police arrested me and detained me for two days. They said I should not have brought her down,” he said

Confirming the incident, the Lagos State Police Public Relations Officer, DSP Bala Elkana, said the police had received a distress call from the general hospital that one Kenile Nwabuzor was brought in dead by her boyfriend

“Preliminary investigation revealed that the lady had earlier sent a text message to her boyfriend that she would kill herself. Her corpse was removed and deposited in the Lagos Mainland Hospital morgue.” Bala said

Kenile was buried on Saturday, April 13 which was David’s 26th birthday. Very sad way to die. Depression is very real; pay attention to people close to you. Rest In Peace Kenile Nwabuzor.