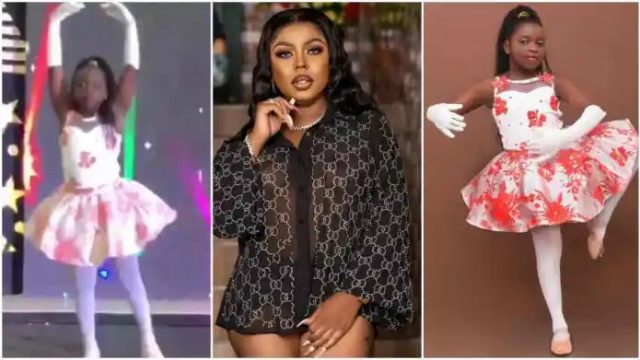 Pena Geiling E Amankona, the daughter of Afia Schwarzenegger, performed in the national ballet production on December 3, 2022, at the national theater without her mother because Chairman Wontumi placed a high value on her life.

In front of a sizable crowd, Pena performed while donning a skin-tight leotard outfit that was white with red flowers sewn on it.

The location of Afia Schwarzenegger’s hiding place is unknown, after Bernard Antwi-Boasiako, better known as Chairman Wontumi, the regional chairman of the New Patriotic Party (NPP) for Ashanti, announced it on December 3, 2022.

As a matter of fact, he promised anyone who came forward with information a prize of GHC 5,000.

To that effect, Chairman Wontumi urged the populace to help the security forces locate Afia Schwarzenegger after the Tema High Court sentenced her to 10 days in jail and a GH60,000 fine.