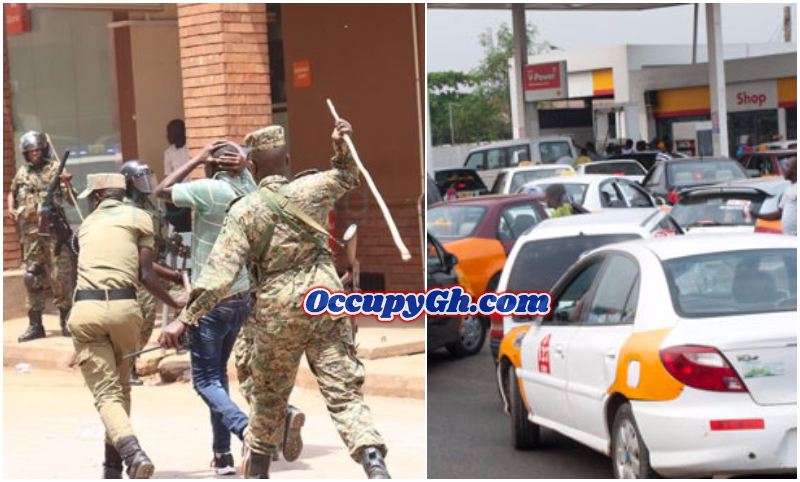 Commotion on Saturday morning broke out at the taxi rank at Anwiankwanta when uniformed military stormed the area in the Bekwai Municipality of the Ashanti Region and subjected them to lashes.

Information reaching us indicates that there was a misunderstanding between drivers at the Anwiankwanta taxi rank and a driver of Sprinter bus vehicle which sparked the whole confusion attracting the muscular soldiers who showed no mercy to the drivers.

Narrating their ordeal in the hands of the soldiers and what actually triggered the entire confusion, the local union chairman of GPRTU told Kumasi-base Pure Fm’s Osei Kwadwo the Sprinter driver attempted to load passengers at the taxi rank when there was a vehicle on scale loading.

The driver of the Sprinter bus was therefore prevented they prevented but he insisted which sparked the confusion before the about 20 uniformed military men were called in because the bus belonged to one them.

“After the confusion, the Sprinter driver told us that the car belongs to a military man so we should wait. Just a few minutes about 20 military men stormed here and started beating us. They came with the Sprinter and the driver. They moved away after brutalized us. Some of us have sustained injuries”. He revealed.

According to the drivers, they have reported the issue to the Member of Parliament for Bekwai Constituency Hon Joseph Osei Owusu while an official complaint has been lodged with has been Bekwai Police Command.