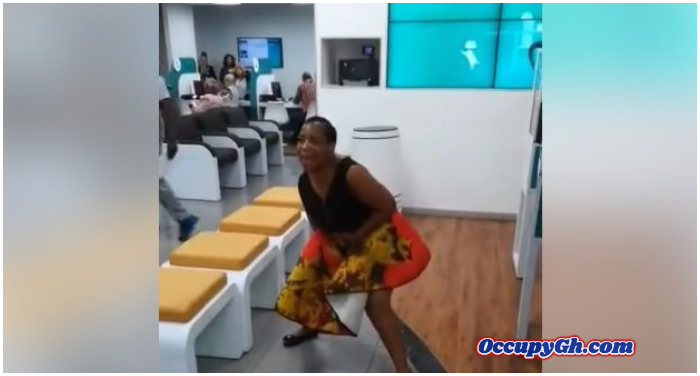 To prove she was indeed pressed and needed to use the washroom, an angry woman who could no longer contain the contents of her bladder let them out in the middle of the banking hall to the surprise of other customers who were in the queue to transact business.

The yet-to-be identified woman, had sought the assistance of staff of the bank to ease herself because she was pressed but they kept tossing her until she could not contain it any longer and in order not to urinate on herself open up and let it out of the main banking hall.

According to eyewitnesses, this was after more than an hour of waiting after she requested for their key to their female washroom which took ‘forever’ to come.

Other clients waiting to be served watched in horror as they received a service they had not even asked for accompanied by the smell.

The lady who did not appear to be embarrassed or shaken for a moment spoke as she went about her business and held tightly onto her skirt.

Check out video below…

In this article:Banks, Bizarre, Crime, Nigeria