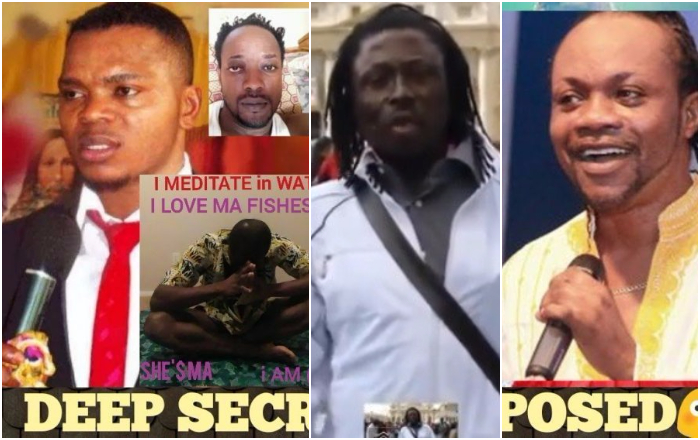 Nana Kwaku Bonsam has alleged that Bishop Daniel Obinim, founder and leader of Godsway International church is the one who caused the death of Anokye Supremo aka Daddy Lumba Junior.

Kwaku Bonsam in a video obtained by Ghpage.com explained that Anokye Supremo would not have died if not for the false hope and bad advised Obinim gave him when he consulted for help.

The popular fetish priest revealed that he had told Anokye Supremo that the only thing will save him is if he comes public and apologizes to Charles Kwadwo Fosu aka Daddy Lumba before he goes for the Tumor surgery but Obinim deceived him into doing “Egg rituals” at his church.

Again, Kwaku Bonsam claims Obinim knew that Anokye Supremo had to apologize to Daddy Lumba but he pretended to have saved him with his egg rituals and the musician blindly believed leading to his death.

The fetish priest also played an audio recording where Anokye Supremo was telling him Bishop Obinim lied to him. Obinim promised never to show the video of his visit to his church but a few days after he left, Obinim shared it across his radio stations and even posted on his Youtube channel.

Based on this evidence which the fetish priest claims he is well aware of, he boldly stated Obinim is the one who caused Anokye Supremo’s death and nobody else.

Anokye Supremo aka Daddy Luma Junior died on 30th January 2019 in India where he had gone for brain tumor removal surgery.

A lot fo accusations and fingers were pointed at Dady Lumba, the role model of Anokye Supremo who had sued him for impersonating his identity.