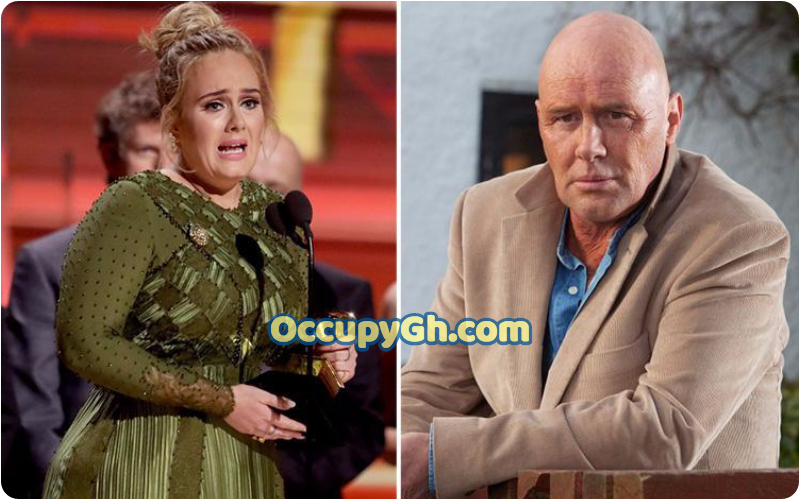 A piece of breaking news reaching our news desk indicates that Adele‘s estranged dad, Mark Evans, is reported dead at the age of 57 after battling cancer.

The 57-years-old died after years of disputes and public rows with his famous singer-daughter.

According to UK Metro, the 33-year-old singer has previously spoken of her fractured relationship with her dad who had been suffering from cancer.

In 2017, Adele infamously hinted at their frosty relationship during her Grammys speech

“Thank you to my manager because the comeback, as it were, was completely masterminded by him.

“And you executed it incredibly, and I owe you everything.

“We’ve been together for ten years, and I love you like you’re my dad. I love you so, so much.

“I don’t love my dad, that’s the thing. That doesn’t mean a lot. I love you like I would love my dad.”

Her bitterness was said to have stemmed from the fact that Mark dumped Adele’s mother Penny and returned to his native Wales when the singer was just three years old.

BREAKING:  "Do This Before You Come To UK" - Nigerian Man Advises People Planning To 'Japa' (VIDEO)

Mark once claimed that he and Adele had made up and shared a drink around the time of her Live tour to support her second album ‘21’, a claim which she later denied.

“Mark’s family are of course very upset by his passing. He always hoped things would work out with Adele, but it remained acrimonious to the end.

“He made a few attempts to make things right, but clearly it had been too long.”

In 2013, Mark revealed that he was battling bowel cancer and feared he would never meet his grandson, Angelo — Adele’s son with charity entrepreneur, Simon Konecki, who she divorced in March.

In this article:Adele, Mark Evans, UK