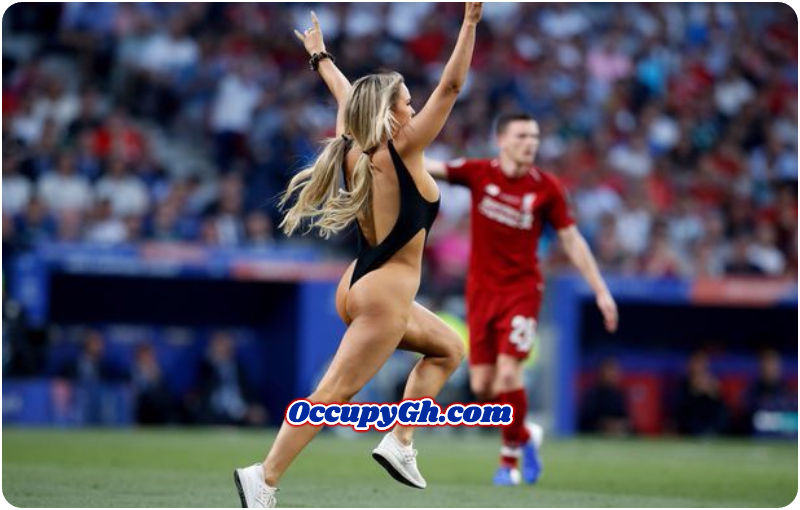 Russian Model, Kinsey Wolanski who invaded the pitch of the Champions League game between Tottenham and Liverpool during the finals has finally explained why she stormed the pitch to disrupt the game.

Play had to be momentarily halted in the first half after the scantily clad blonde bombshell jumped over the advertising hoardings and sprinted across the Wanda Metropolitano pitch.

She was hauled off by stewards and remanded – but she appears to have been released after breaking her silence on social media.

Wolanski, who was promoting her boyfriend’s adult prank group, Vitaly Uncensored, offered a 12-word explanation as to her dramatic interruption of the biggest game in European club football.

“Life is for living, do crazy things that you will remember forever,” she wrote, accompanied with a video of her pitch invasion filmed from the stands and footage of her being dragged away by stewards behind the scenes.

She then posted a picture of her being led away, watched on by Spurs midfielder Harry Winks, captioned: “Did I distract #8 a little too much?”

Wolanski saw her social media following sky rocket after the incident, rising from tens of thousands to a huge 900k within the space of a few hours.

She was praised by boyfriend Vitaly Zdorovetskiy, a famous YouTube prankster who famously disrupted the 2014 World Cup Final, as he vowed to marry her in the aftermath of the incident.

The pair are prominent on the adult prank group Vitaly Uncensored, with the branding of the channel splashed across Wolanski’s black leotard as the Russian swimwear model hit the headlines in front of millions of Champions League viewers.

Liverpool were already 1-0 up at the time of Wolanski’s interference early in the first half, and they ran out 2-0 winners after substitute Divock Origi sealed a sixth European triumph with his late left-footed drive into the bottom corner.

In this article:UEFA Champions League