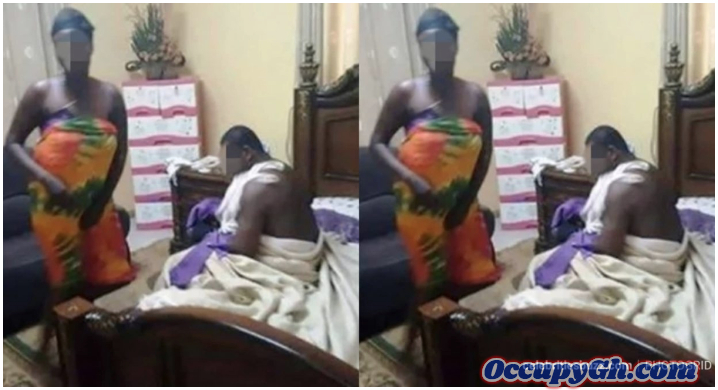 A council of elders of Christian Faith Evangelist Church have excommunicated an elder who is said to be engaged in an amorous s*xual relationship with the newly wedded wife of their pastor, mynewsgh.com reports.

It is gathered that the two were already in relationship before the woman married the pastor recently but that however did not stop them from seeing each other at obscure places and sometimes in movie houses until their cover was blown upon a tip-off.

According to the elders who summoned the adulterous wife, Mercy Igbo, 32 before handing the verdict to her lover, the woman claimed she agreed to marry the pastor because he had money and all the necessities and abandoned the boyfriend who was coincidentally an elder of the church.

Things started to change between the pastor and the woman as they spent a year without a child and she was frequently complaining of her husband`s inability to satisfy her in bed.

It is believed that the pastor had a problem with his manhood that he could not produce fruits.

The woman fall back and started to show interest in his ex-boyfriend and two continued to run their affair secretly such that when the woman`s travels , Adenuga would go in and sleep with his ex-girlfriend.

Before their cover was blown, the pastor departed on a night trip to another church where he was expected to lead the following day`s Sunday service. Unfortunately the car he had used had a break down that made him to abandon the journey and go back to his house.

Like always, the wife had already given Adenuga the news that her husband had travelled and agreed to spend the night together at the pastor`s house.

Shockingly, when the pastor returned he found the two in love that brought the quarrel between Adenuga and the pastor since they were all fighting the ownership of the woman.

Meanwhile, the pastor has sworn not to leave the cheating wife claiming they made a vow to stick together for better for worse.