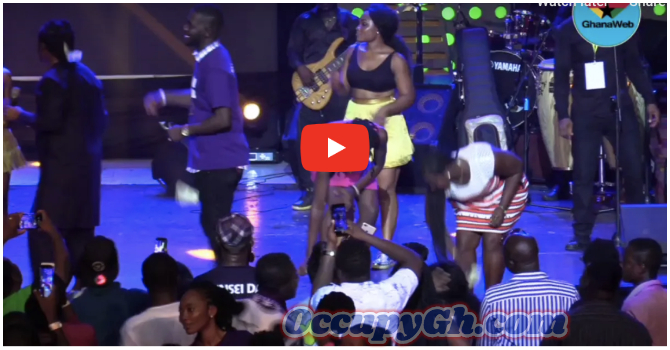 Well celebrated Ghanaian highlife musician, Charles Kwadwo Fosu, aka Daddy Lumba (DL) at the just ended MTN Music Festival 2019, was seen humiliating a fan on stage during his performance for spraying money on him. (Video below)

The fan who identified himself as ‘Big Joe’ climbed unto the same stage that Daddy Lumba was performing just to get a shoutout from the highlife legend and also to spray money on him.

In a video captured by GhanaWeb shows that ‘Big Joe’ after getting his shoutout started spraying the ‘Aben Wo Aha’ hitmaker some money and at a point interrupting his performance but Daddy Lumba (DL) who was feeling uncomfortable was seen telling this fan to stop but with excitement, ‘Big Joe’ was still spraying the money thinking that it was normal.

The musician who was then treating his fans to his ‘Yentie Obiaa’ hit song had to stop singing, confront the ‘Big Joe’ before he (Big Joe) walked off the stage with embarrassment.

Daddy Lumba later had to continue with his performance. Watch video below and don’t forget to comment below: