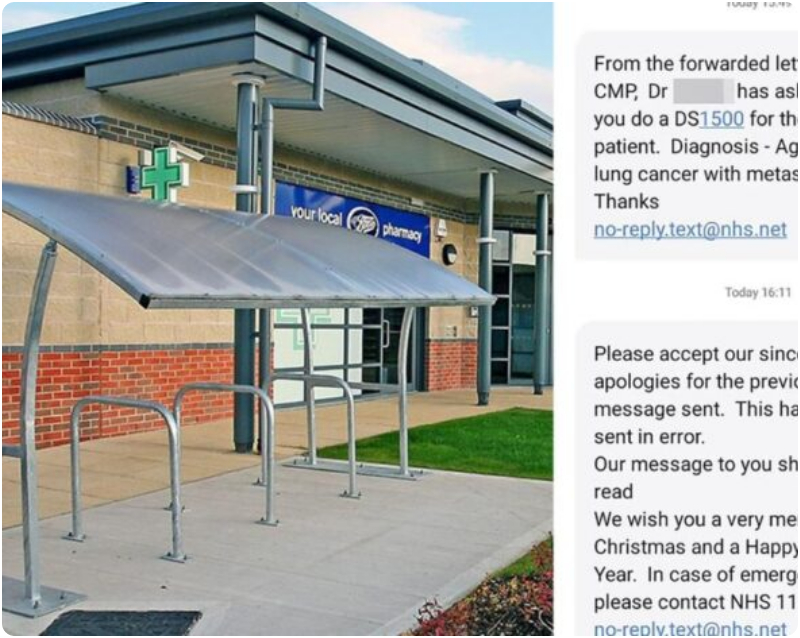 A UK doctor’s office sent out a text message to 8000 plus patients with startling news that they were dying of cancer – instead of sending out Christmas holiday greetings.

It asked patients to fill out a form that allows people with terminal illnesses to claim benefits, leaving many who got it bursting into tears.

But within the hour, the surgery sent a follow-up offering “sincere apologies for the previous text message sent.”

“Our message to you should have read, ‘We wish you a very merry Christmas and a happy New Year,” it read, according to a screenshot.

The BBC said the horrifying mixup was sent to everyone registered at the practice — which would be nearly 8,000 patients.

Carl Chegwin told the broadcaster that the accidental message “was enough to break someone.”

“The first thing I thought was, ‘is this some kind of sick joke?’” he recalled.

At least one of those who got it, Chris Reed, 57, was waiting for results after tests for lung cancer — with the text seemingly confirming his worst fears, leaving his partner bursting into tears, he told The Telegraph.

“They went from ‘you’ve got lung cancer’ to ‘merry Christmas’ in about an hour. Unbelievable,” said Reed, who could not get through to the doctor’s office because so many other horrified patients were calling.

Sarah Hargreaves told the BBC that she was also waiting for cancer-test results at the time, and “felt sick to my teeth and broke down” when she got the text.

As well as the mishap, the mere fact that such sensitive news was being shared by text stunned many of the practice.

Some even questioned if one patient even had a double shock.

“What if that message was meant for someone, and then they are told it’s a Christmas message, then again told, ‘Oh no, that was actually meant for you’?” Chegwin said.

The group that runs Askern Medical Practice told the BBC nobody was available for comment.

In this article:Crime, UK, Viral