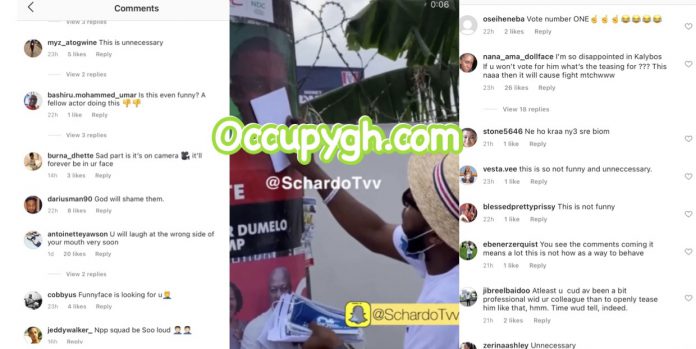 This upcoming presidential and parliament elections seem to be very heated than it has ever been.

Ghanaian Comedian-Actor, Kalybos who has come out clearly as a keen supporter of the NPP has ridiculed his fellow actor, John Dumel for supporting and even standing as an MP for the opposition party, NDC.

In a video which has been circulating online, the ‘Boys Kasa’ actor was seen slapping the poster of the NPP party onto Dumelo’s poster which was plaster on a pole.

Many people have expressed their utmost disappointment in the actor, stating that, it is so uncalled for to ridicule his fellow actor because of politics.

Read:  NDC Officers Jubilating At Strong Room As Collation Seems To Be Favoring Them | VIDEO

Sarkodie Reacts To News That He Is Dead