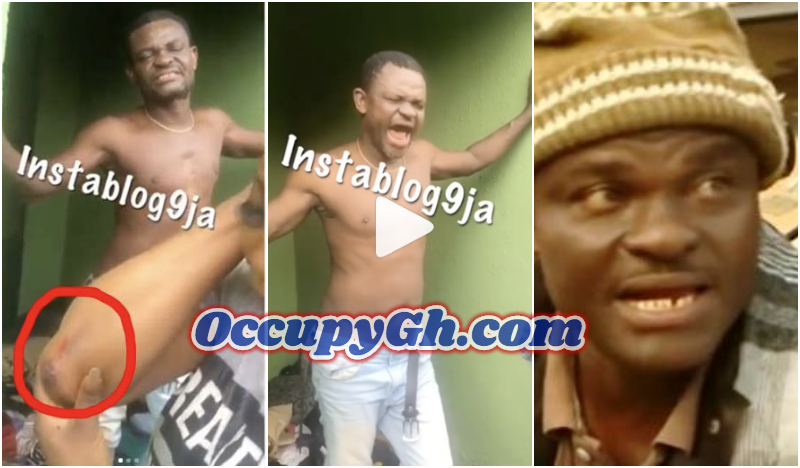 Popular Nigerian comic actor, Francis Odega after beating his wife threw her and their daughter out of his house and according to popular Instagram gossip blog, Instablog9ja, his daughter is currently pleading with people to assist her to pay for her school fees.

In a report by Instablog9ja, one of the in-laws of Francis Odega narrated how Odega has subjected his wife to severe beatings ever since they got married 15 years ago.

Read the full report by Instablog9ja below;

“The daughter of actor Francis Odega of the “gerarahere” fame, has cried out to Nigerians to help prevail on him to pay her school fees, even as he has kicked her and her mom out of the house.

Giving details of what has been going on, one of Mr. Odega in-laws wrote: “My sister has been with Frances Odega for 15 years. When my sister met him he had nothing, then he was living at Mafoluku, #Oshodi, Lagos. .

Then, he only had a video club that wasn’t bringing enough money, so my sister started a salon in the same shop and was taking care of the family with the salon business.

Then things got very bad because he wasn’t getting any job and whenever my sister advises him to even go out to connect with colleagues that could probably help him, he would beat her up so badly.

When I was 14, I went to live with them at Aburu around lpaja and my sister was 8 months pregnant. She had to always visit the hospital because of the everyday beatings.

BREAKING:  Sad: Davido and Chioma Have Lost Their Son Ifeanyi

One faithful night, I was home sleeping and my sister was at the hospital, Mr Odega came home and tried to rape me and I managed to run out of the house.

So many times he has beaten my sister to the point that she will have to wake up at the hospital and each time all he will say is that my family will do nothing, that we don’t even have money to make any case with him.

Most times he locks her outside overnight and most times he will embarrass her in public by calling her name, stripping her naked, accusing her of so many things.

So this year, he sent her packing with her daughter, the only child they both have, but he has refused to pay her school fees. As for my sister, she wants nothing to do with him again because the embarrassment is too much.

He sleeps with the girls working for her. Even in the house they lived, he slept with a married woman and the husband saw them and sent the wife away. I can go on and on.

I want Nigerians to help us tell this man to pay her daughters school fees that’s all. Attached is a video of when he beat my sister and sent her packing after locking her out for two nights”.

In this article:Francis Odega, Nigeria