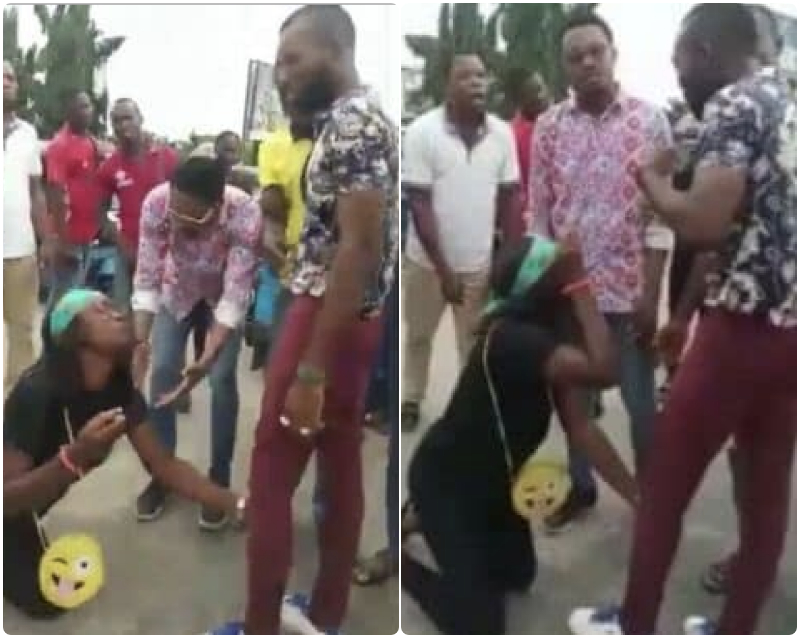 Ghanaian Lady Proposes To Her Boyfriend In Public; Her Response Causes Stir Online

A young Ghanaian lady has caused a huge stir online after a video of her proposal to her boyfriend in public surfaced online.

In a video privy to occupygh.com, the young lady was spotted on her knees, begging her boyfriend to marry her who in return said a big no.

The idea of a woman proposing to a man is still frowned on by Ghanaian society and Africa as a whole.

However, some women are actively shooting their shots recently and 95% of similar cases happened to have an embarrassing outcome, judging by recent events on social media.

The lady in the subject most definitely met the shock of her life when she took to the streets to propose to her guy, only for her to be turned down by him in the presence of strangers.

Relentless and not accepting no as an answer, the lady is seen in a viral video seriously begging the guy, as she holds on to his leg with one hand and the ring with the other hand.

Passersby and onlookers are also seen staring in awe at the situation while some of them confront the gentleman to ask that he stops embarrassing the lady and just take the ring from her.

Another person can be heard, saying “you don sleep with am finish, you no wan marry am abi?”.