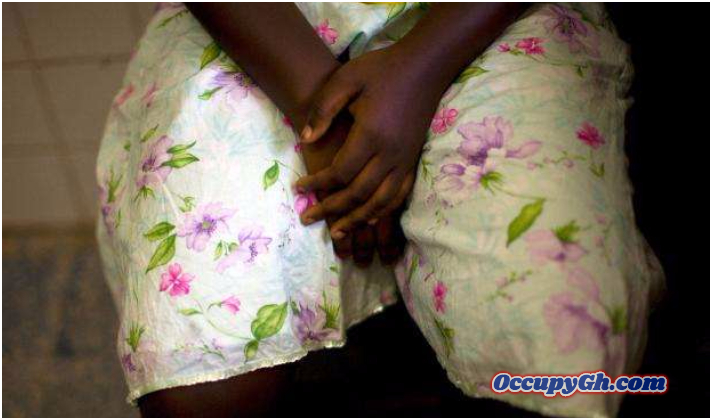 A teenager in the Volta Regional town of Denu has accused the father of sexual harassment and alleged that he insisted the move was part of ritual purposes [juju] aimed at helping him to maintain his job.

The father is said to have sexually assaulted her by licking her v*gina and pouring alcohol in it as part of a ritual.

According to a radio report by Accra-based Citi FM, the teenager is a final year student at a basic school at Denu in the Volta Region.

The girl is reportedly refusing to go back home and hanging out with friends, fearing that, the father will continue to sexually abuse her.

According to Citi FM’s report, the father is said to have continuously requested to lick her v*gina after he once managed to pour alcohol in the v*gina.

Speaking to the radio station, the girl alleged the father told her it was to help him maintain his job.

She said they had been staying in Cote d’Ivoire and since they returned to Denu in Ghana, she had been attending evening classes and when she went home one time, the father told her to remove her dress and she agreed after which he made her lie down.

“When I lied down, he poured alcohol into my v*gina and he said I should go and bath,” the girl narrated.

The father on his part has denied the accusation and rather explained he only sought for the child to be punished by the mother, following reports that she left school to buy a pen whilst evening classes was still ongoing.

The father told Citi FM that the girl normally close the evening class at 8 pm and her mother suggested one time that due to recent cases of kidnapping, they should go and check on her whilst in school in the evening and when they got there around 7 pm, she was not on the campus but her bag together with that of other students were still there.

He said they enquired from a male teacher who said he didn’t know her but another female student said she had gone out of campus together with other students and a male teacher.

He said they took her bag home and the following morning, her mother punished her.

But discounting the father’s version of the explanation, the teenager’s brother rather corroborated the victim’s story and explained the father asked his sister to sleep naked after school to enable him check if she was still a virgin.

In this article:Crime, Volta Region