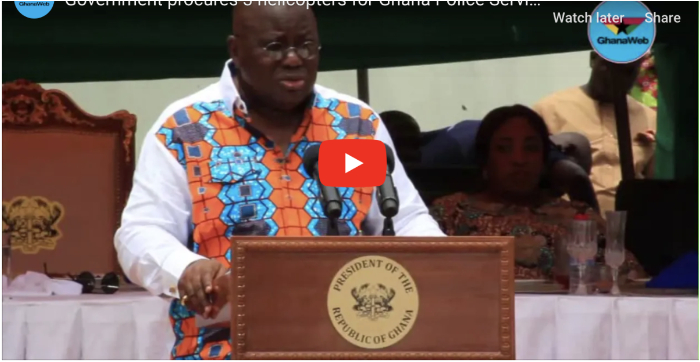 Following the upsurge of lawlessness and acts of violence in several parts of the country, President Nana Addo Dankwa Akufo-Addo has revealed plans by his government to secure three helicopters for the Ghana Police Service. (Video below)

According to the President, this provision is intended to facilitate the operations of the Ghana Police Service in curbing crime and the several acts of lawlessness in the country.

To complement the procurement of the three helicopters, President Akufo-Addo says his government has also made plans to train a number of selected Police officers as pilots.

“Three helicopters are being procured to facilitate police operations with some selected police officers set to be trained as pilots,” the president announced.

He also touched on the several provisions his administration has made for the Ghana Police Service including the 320 vehicles which have already been provided and an addition of about 273 which is yet to be delivered.

Reacting to the issue of promotions in the Ghana Police Service, President Akufo-Addo emphasized that the issue of police officers having to wait for more than the mandated number of years before their promotions are due has been dealt with.

“Under this administration, the era where an officer stays without being promoted for more than the mandated four years is over,” the president noted.