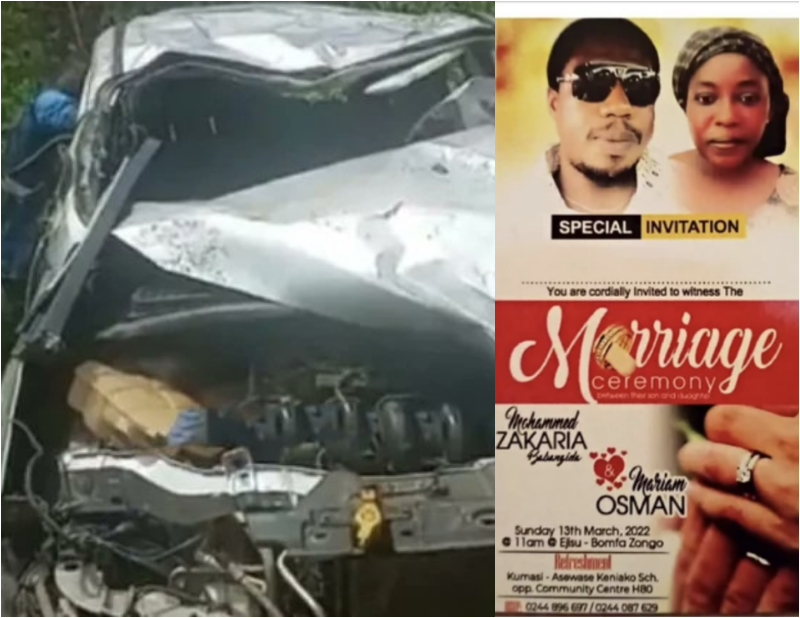 Kumasi: Groom Crashes To Death On Way TO Wedding, Bride In Comma (PHOTOS)

This story has sent shivers down the spine of many on social media as they stumble on it; many react with prayer emojis as they sympathize with the family.

A 40-year-old groom has died on the spot while on the way to his wedding after the car carrying him and his friends run into a ditch.

The incident occurred at Fumesua on the Kumasi-Accra highway in the afternoon of Sunday, March 13.

The deceased, Mohammed Zakari was driving a Ford Escape vehicle with registration number AS 3222-21, occupied by four of his friends when the incident happened, according to the police.

The four other occupants were rushed to KNUST Hospital for medical care.

According to 3news.com, one of the victims who sustained life-threatening injuries has since been transferred to Komfo Anokye Teaching Hospital (KATH) for advanced treatment.

The news website reported that the Ejisu Motor Transport and Traffic Directorate (MTTD) has commenced an investigation into the incident.

The deceased’s bride is also reported to have been in a coma after suffering from a traumatic shock.

A wedding poster shows that the event was scheduled to take place on Sunday, March 13 at Ejisu-Bomfa Zongo.

In this article:Accident, Featured, Relationship, Viral