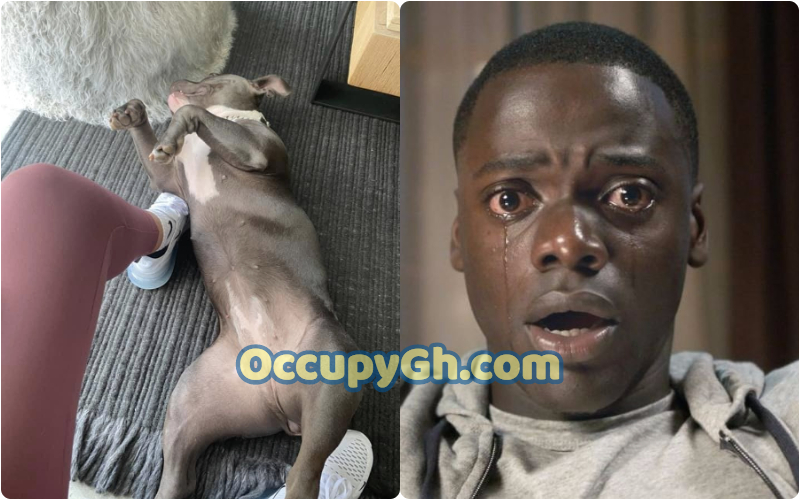 "I Busted My Wife Having S_ex With Our Dog" - Man Shares

A young man has shared his story on social media on how he stumbled on his wife having s_ex with their dog.

According to the man’s story privy to OccupyGh.com, he heard a noise coming from their bedroom only to find out that it was his wife with their dog.

We had been living with mercy for three years now. She was really a fan of pets, especially dogs. I can recall her carrying our dog by my vehicle each time we went to the shop. When I asked her it was like a dispute between me and her. She really defended the pet as you would think it was our kid. Actually, we had no kid at that time. She even went with this male dog to the bathroom.

One day I threatened to poison this pet. She was really furious where she even threatened to break up our marriage. So I ignored how things were and let it go. She would even spend more money to buy this pet foodstuff which cost thousands of money.

This pet was really shaking our love with my wife like all the time she concentrated on to the non-speaking animal. I really wondered wherein our African culture dogs are allowed to sit by the sitting room and even feed expensive dishes than some people.

Not that I did not satisfy her s-exually I did it well but she had the habit of concentrating more on the dog than me. At times she would not hear me calling her; she would even forget her chores like cooking in late hours. Other times she went on morning runs with the dog and that’s when I suspected something fishy was going on.

When I shared the story to my close friends about my experience, they all busted in laughter for they could say I had been hen-pecked by my wife. Some would castigate me a say I was just a toyboy in my own house. Others would say I
did not satisfy her s_exually and so she thought the dog was there for consoling her.

Others would even say the dog maybe was much prettier than I was. But comments and such utterances made me fight back unto them with insults too. I knew I did everything right as a husband. My wife lacked nothing money was there, love was there plus I spent much of my time talking to her, but she did not put this pet aside. She accompanied it at any place she went.

One day as I was watching a football match in the sitting room I heard some noise coming from our bedroom. I first ignored it but the second time the noise increased like someone suffocating. I rushed there and found my wife being orally pleasured by our neutered male dog. I did not know what to make of this.

I was really shocked and almost fainted. She felt shy and sat by the bed as the dog panted with its tongue outside. She asked for forgiveness and one time I forgave her. As time went by she started again showing signs of being interested in the pet again.

I had built a kennel outside our house where our dogs slept but with time she began bringing the pet back into the house. It really shocked me for such instances of bestiality in our African culture were really taboo.

We welcome your thoughts in the comment section below or visit OccupyGh.com for more related stories.