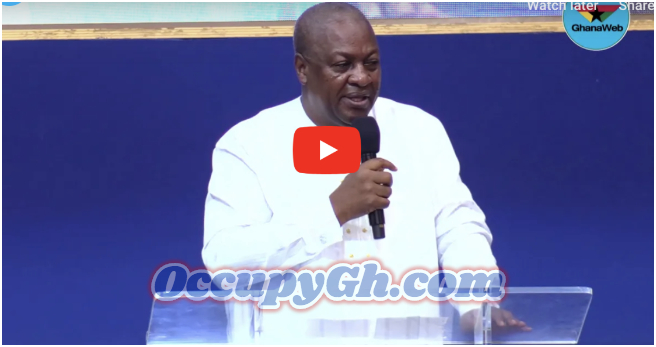 A video that has surfaced the internet Shows former president John Dramani Mahama admitting to the content of a leaked tape implicating the National Democratic Congress National Chairman – Samuel Ofosu Ampofo. (Video below)

Speaking at the thanksgiving service at Perez Chapel International on Sunday, 3 March 2019 in commemoration of a successful flagbearer elections, the ex-President explained that attack as used by Mr Ofosu Amofo was not meant supporters should physically assault the Chairman of the National Peace Council.

Mahama’s admission of contents of the tape appears to be in variance with accounts of National Communications Officer of the NDC, Sammy Gyamfi who in the heat of the leakage claimed 80% of the contents were doctored.

“I can tell you that, 80% of the voice is fake” – after accusing the ruling New Patriotic Party [NPP] of masterminding that connives”, he disclosed adding “This is against the law. This is undemocratic”

“What prevented them from releasing the original tape? Let me tell you, I was at the said meeting and our Chairman never said what is on the tape. Why is the NPP spying on us [NDC] and planting budding devices at our offices. This is criminal,” he averred.

Last week, reports were of a leaked tape captured someone believed to be Samuel Ofosu Ampofo, NDC National Chairman at a meeting to discuss the aftermath of the Ayawaso West Wuogon by-election was heard inciting party communicators against heads of some departments.

In the said tape he was heard saying in part “As for the EC Chair, we must wage a relentless war on this EC chair. Me, she doesn’t want to see my face. We will go after them, but we will not go after them face-to-face. We have to use tactical operation to make life very uncomfortable for them. We will target some people and we will let the people know that their lives are in danger.
Source: MyNewsGh.com

In this article:John Dramani Mahama