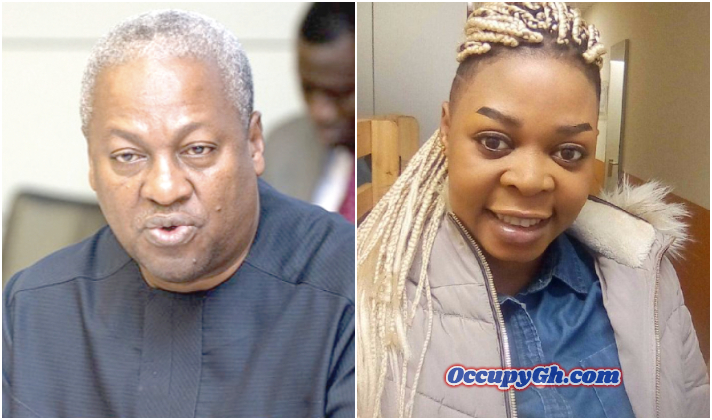 Controversial former HIV/AIDS ambassador, Dzidzor Mensah, has stirred another controversy with the names of former president John Mahama and his wife Lordina.

Dzidzor wrote plainly in a post sighted by YEN.com.gh on her Facebook page that Mahama and his wife are ‘use and dump’ champions. According to her, she had cried and tried to reach out to the former first couple for help on countless occasions but they ignored her.

Dzidzor added that Mahama and his wife were then busily enjoying “the million dollar HIV money.” She stated that now that NPP’s Abronye DC was calling for her arrest over claims that Mahama allowed Dzidzor to ‘waste’ state money with falsified HIV/AIDS positive claims, Mahama was feeling uncomfortable.

Dzidzor wrote: “All these years that I’ve cried out to Mr Mahama and mrs Lordina with uncountable letters and so on they pretended they never heard me. Use and dump mu champions.” “All because they were busily enjoying the million dollar HIV money. Now that my boyfriend Abronye DC is calling out for the HIV money Mr Mahama suddenly appears to insult my boyfriend Abronye DC. Obiaaa wo ne master ampa.”

Though YEN.com.gh cannot verify this, Dzidzor herself, on many occasions, gave hints about this, especially when she shocked the whole of Ghana later saying she was HIV negative.

In an earlier report by YEN.com.gh, she threatened to expose Mahama and his wife, but still, she was tight-lipped on what exactly she wanted to expose them about.

Again, she stirred massive controversy when she revealed in another report by YEN.com.gh that two ‘powerful’ NDC men slept with her without pay. She disclosed that one of the men occupied a higher position from the north, and the other was a minister. YEN.com.gh will follow up on this new development and update our readers with fresh information as they come in.