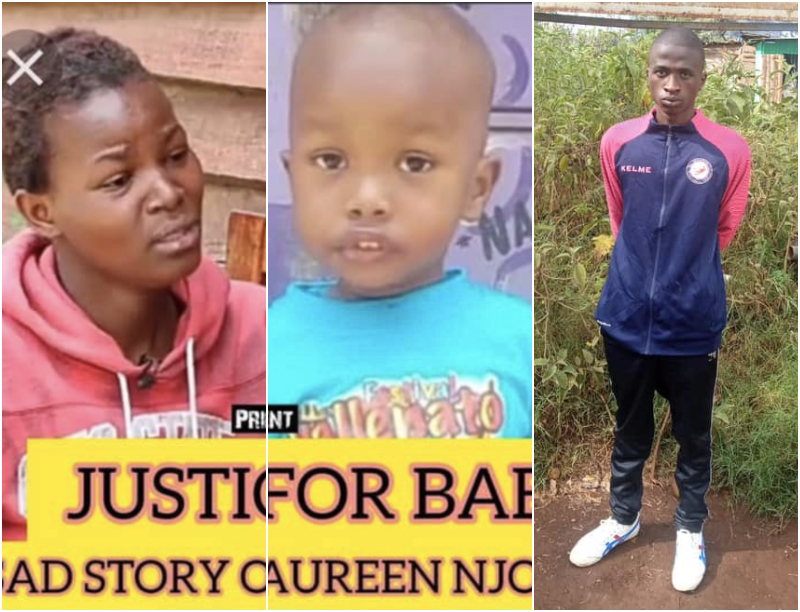 A Kenyan couple, Phyllis Njeri and Jockson Ngui, has been arrested by the detectives for the brutal murder of a 3-year-old boy, David Ndung’u.

Phyllis Njeri, who allegedly tortured the boy to death, was arrested at her hideout in IIIasit village, close to the Kenya-Tanzania border, in a well-coordinated operation conducted by detectives drawn from the elite Crime Research and Intelligence Bureau (CRIB).

The boy and his six-year-old brother were said to have been left under the care of Njeri by their mother, Maureen Njoki, who had left the country in November last year for Saudi Arabia in search of greener pastures.

Barely four months after her departure, Njoki received the devastating news of her son’s brutal murder in the hand of her longtime friend.

According to his brother, David was smashed against the wall several times as he watched helplessly.

Maureen said she had left the kids under the care of her grandmother but things didn’t go down well with her. She then confided in Phyllis Njeri, who offered to take care of the children at a salary of 13k.

Directorate of Criminal Investigations, DCI, in a statement on Wednesday, March 30, said that the Njeri and her husband dumped the boy’s body at Mama Lucy Kibaki’s hospital mortuary and fled.

“Phylis Njeri, who tortured the 3-year-old boy to death was smoked out of her hideout at Illasit village, close to the Kenya-Tanzanian border, in a well coordinated operation conducted by detectives drawn from the elite Crime Research & Intelligence Bureau (CRIB) augmented by detectives from the Homicide branch and a crack unit based at DCI Nairobi regional headquarters.

“Earlier, sleuths based at the Corporate Communications & Public Affairs unit had gathered information circulating on social networking platforms regarding the baby’s murder most foul and shared details of the incident to the elite teams.

“Investigations were launched immediately, unearthing gory details of how angel David was brutally murdered by Njeri and her husband Jockson Ngui, while her horrified elder brother Peter Ndung’u watched in shock.

“David and his 6-year-old brother Peter had been left under the care of Njeri, by their mother Maureen Njoki, who had left the country in November last year for Saudi Arabia, in search of greener pastures. Barely four months after her departure, Njoki received the devastating news of her son’s brutal killing, triggering online outrage by Kenyans who called on the DCI to bring the suspect to justice.

“The joint team of detectives conducted thorough investigations into the incident and through application of cyber & digital forensics, the suspects were traced at their hideout in the remote village in Kajiado county, as they desperately sought to cross the Kenyan border to Tanzania.

“Further forensic analysis conducted at the couple’s house in Kwa Maji area within Mowlem, in Kamukunji sub-county, revealed that the baby was killed in the house before his body was dumped at Mama Lucy Kibaki’s hospital mortuary.

Upon realizing the gravity of their actions, the murderous couple had desperately attempted to seek medication at local chemists but the little angel was long gone.

“Baby David’s body had severe burns on both hands, legs and buttocks. It also had fresh injuries on the neck, the back and the face, signifying the amount of torture that the minor underwent, before his painful death,”

The detectives also recovered a whip that was used to assault the deceased’s elder brother who was beaten senselessly and threatened with dire consequences should he reveal what had happened to his brother.

The two suspects are currently being transferred to Nairobi where they will face murder charges.

Meanwhile, detectives based at the DCI National Forensic Laboratory, biology division and their scenes of crime counterparts shall be visiting the couple’s house for further DNA analysis of the scene, to obtain more scientific evidence for a watertight case against the suspects.

“The Directorate of Criminal Investigations thanks Kenyans on social media who brought the matter to our attention. We encourage any other victims of crime seeking justice to report to us directly through our interactive online platforms.”