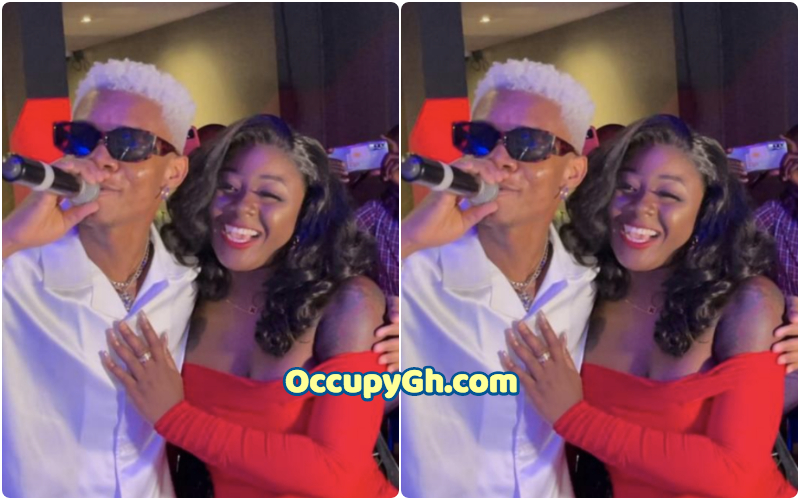 Ghanaian musician KiDi has been spotted romancing Salma Mumin at his Album Listening with some selected media moguls, top fans & family at the Rock City Hotel, in Kwahu, on Tuesday, June 22, 2020, was seen having a great time with the queen diva Salma Mumin.

Kidi who announced his sophomore album “The Golden Boy” just two days after grabbing the “Artiste of the Year” award at the 2021 3Music Awards, marvelously performed for the first time a couple of songs off the yet-to-be released ‘Golden Boy’ Album, scheduled to be released on all Digital Platforms and Stores on Thursday, 24th of June 2021.

In a video already circulating on Social media was seen Kidi performing live with his band showering great love words through the songs on Salma Mumin, which got fans and love once who were present to react on it. Kidi’s label mate Kuami Eugene later joined him in performing their hit track ‘Spiritual’, which blew the minds of the fans away.

The Golden Boy album will be Kidi’s second album. He has one EP in-between in which his first album titled “Sugar” which was released in 2019 won the album of the year at the 2020 edition of the VGMAs, beating Sarkodie, Okyeame Kwame, King Promise, Joe Mettle, Kwesi Arthur and Nacee to secure the top spot in the category. His first EP, “Blue”, which was released last year won the “EP of the Year” at the just ended 3Music Awards.

In this article:Kidi, Salma Mumin, Viral