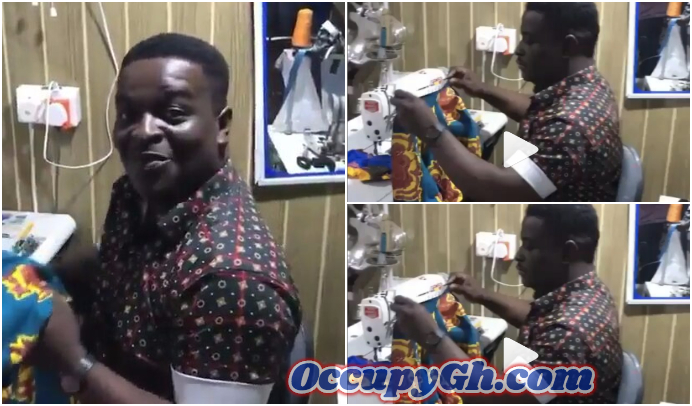 A video spotted by OccupyGh.com indicates that Kumi Guitar may have become Kumi Guitar following the woes that befalled MenzGold Ghana, one of the subsidiaries of Nana Appiah Mensah. (Video below)

Kumi Guitar who was signed to Zylofon Media as a recording artiste last year had a promising music career not until the collapse of a Gold firm owned by the CEO of Zylofon Media.

Information reaching us indicates that Kumi Guitar is currently undergoing training by a Fashion Designer. He is being taught to sow dresses instead of returning to the studios to record music for his fans.

Kumi Guitar now Kumi Tailor can be heard in the video that, if care is not taken, he will change from Kumi Guitar to Kumi Tailor. Kumi Guitar’s recently discovered trade could be because of the present misfortunes of Menzgold, a sister organization to Zylofon Music.