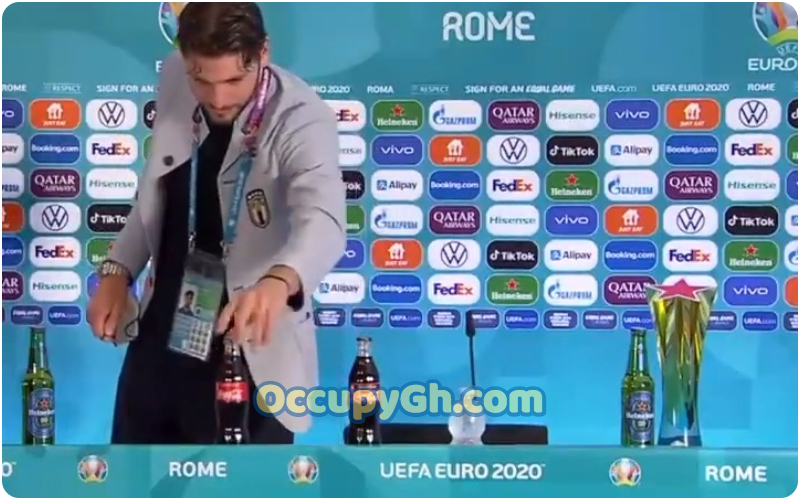 Manuel Locatelli joins Cristiano Ronaldo in moving aside the Coca-Cola bottles in his post-match press conference for Italy in the ongoing EURO 2020.

Ronaldo, 36, had caused a stir with a gesture involving two bottles of Coca-Cola, which caused the share price of the beverage company to fall by $4billion.

There was a similar scene on Tuesday night when France midfielder, Paul Pogba, removed a bottle of Heineken beer from the table during his post-match press conference.

However, Locatelli has now become the third player to take offense with Euro 2020’s sponsors, removing two bottles of Coca-Cola from the front and center of the table and putting his bottle of water directly in front of him instead.

BREAKING:  "Do This Before You Come To UK" - Nigerian Man Advises People Planning To 'Japa' (VIDEO)

The Sassuolo star was impressive for Italy as they defeated Switzerland 3-0 on Wednesday evening, scoring two goals to win UEFA’s Man of the Match award.

After arriving at his post-match press conference following Italy’s victory over Switzerland, the 23-year-old moved the Coca-Cola bottles out of shot and put the water in the middle, mimicking Ronaldo’s ‘Aqua!’ remark as he spoke to the press officer.