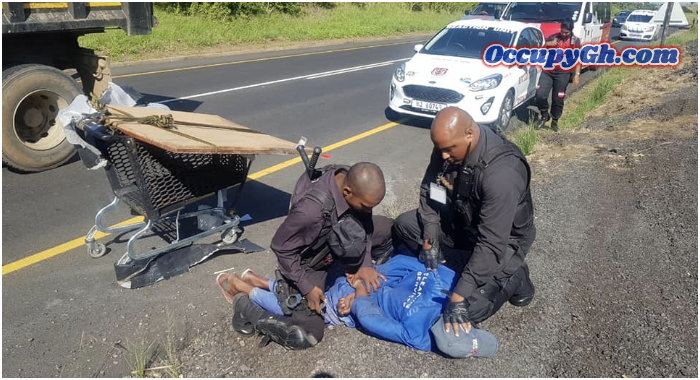 A woman was rescued and a man that attempted to rape her was arrested early this morning. According to reports, the incident happened on Umdloti Beach Road at the entrance of Mt. Moreland in KZN, South Africa.

At approximately 09:05am, members of Reaction Unit South Africa arrived on scene and found an emotional female standing on the roadside. She explained that while walking to her place of employment near Umdloti Beach she was accosted by a man pushing a trolley.

Without warning he grabbed her by her shirt and dragged her more than seventy (70) meters towards a bush where she believes he intended on raping her. Her shirt was torn where he had grabbed her.

The incident was witnessed by passing motorists who contacted RUSA and requested assistance. Two motorists and a female pedestrian went to assist the victim when the suspect casually walked away. The victim pointed out the suspect who was apprehended by Reaction Officers.

During questioning he claimed that he was the victim’s brother according to tradition however she explained that he was Xhosa and he confirmed that he was Zulu. When confronted with the information the suspect could not provide a reason as to why he attacked and dragged the woman towards the bush.

He was placed under arrest and handed over to the Verulam SAPS for further investigation.