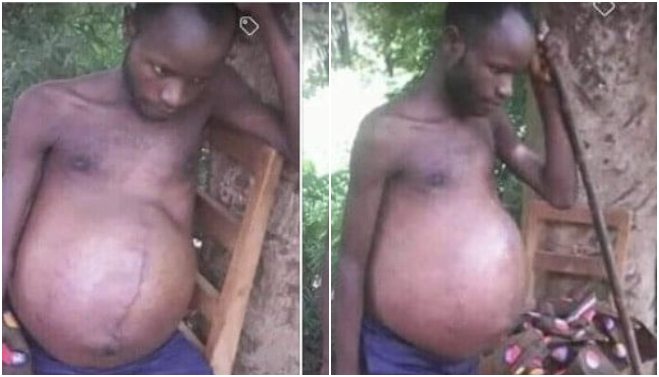 Like they say, Africa has it all, from success, pain, joy, taboos, superstitions and whatnot.

Also it’s believed that some men have the power to tie their wife’s ‘v*gina’ with juju so that if any man sleeps with her or that’s if she cheats, they’ll get stuck during intercourse.

It’s also believed that one can die by after sleeping with someone’s wife.

Well, there’s a viral photo online which see a man with a protruded stomach. According to social media comments, his situation emerged after he slept with somene’s wife.

Well, checks by OccupyGh.com indicates that the condition of this man above could be due to distended stomach — a medical condition.

When the term is used in this manner, a number of different diseases and conditions can cause abdominal distension.

These conditions can be related to digestion, such as malabsorption or lactose intolerance, or to disturbances in bowel function, such as irritable bowel syndrome (IBS) or constipation. Bloating is another term that is sometimes used to refer to a swollen belly.

Consumption of high-fiber foods can lead to intestinal gas and bloating. Less commonly, ovarian cysts or other types of tumors can cause the appearance of a distended abdomen.

The accumulation of fluid in the abdominal cavity, known as ascites, can cause the appearance of distension. Ascites has a number of causes, including cirrhosis of the liver.

In this article:Medical Condition, Pregnant Man