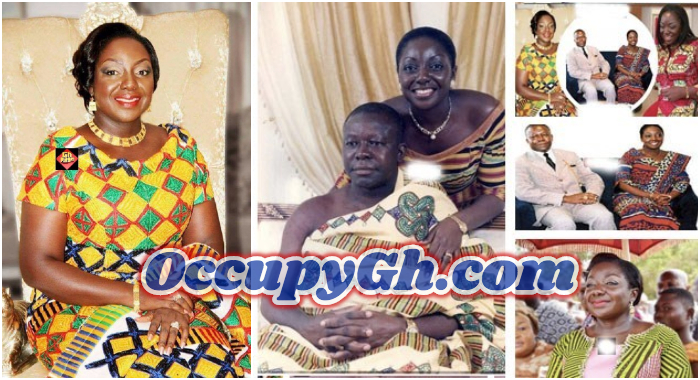 The Asantehene, Otumfuo Osei Tutu II, was born on 6th May,1950. His name at birth was Barima Kwaku Duah, having been named after his paternal grandfather, Ohenenana Kwaku Duah (Nana Agari), Brahyiahene, who hailed from Kantinkyiren in the Atwima District in the Ashanti Region.

Otumfuo is the 3rd son and the 5th child of his mother, the late Nana Afia Kobi Serwaa Ampem II, Asantehemaa, who was blessed by Almighty God with three sons and two daughters.

Otumfuo’s father was Ohenenana Kwame Boakye Dankwa, who also hailed from the village of Kantinkyiren in the Atwima District in the Ashanti Region. Ohenenana Boakye Dankwa succeeded his father, Nana Kwaku Duah Agari, as Brahyiahene.

At age five, Otumfuo was placed under the guardianship of his uncle, Oheneba Mensah Bonsu, who had been enstooled as Hiahene in 1952. This was to secure his proper upbringing and to school him in royal conduct.

Otumfuo’s primary education began in Kumasi and subsequently continued in 1964 at Sefwi Wiawso Secondary School in the Western North Region, under the tutelage of the Omanhene of Sefwi Wiawso, the late Nana Kwadwo Aduhene II, a cousin of Oheneba Mensah Bonsu, Hiahene.

Otumfuo’s secondary education was followed by Accountancy studies in 1971 at the then Institute of Professional Studies, (now University of Professional Studies, Accra). Opportunity knocked for Otumfuo to proceed to the United Kingdom to continue his tertiary education at the London Metropolitan University, from where he graduated in Human Resources Management and Public Administration.

Rather than staying in academia to pursue post-graduate studies, Otumfuo jumped straight into the world of work in Canada and England.

In 1981, he worked as a senior consultant with the Mutual of Omaha Insurance Company in Toronto, Canada.

Otumfuo Osei Tutu II, the Asantehene, in his youthful days
His strong passion for the Real Estate and Financial Services industries led him to abandon salaried employment.

This was in the mid 1980s, the booming era of Prime Minister Margaret Thatcher’s property-owning Britain.

Mortgage Finance was in abundance and Otumfuo (then Barima Kwaku Duah) used his business acumen to forge useful contacts with bankers and mortgage financiers in the UK.

In the process, he established an excellent reputation as a credible and creditworthy realtor in the UK.

This solid reputation helped him to obtain the requisite mortgage finance for many clients, especially first time buyers, to purchase their own properties in the UK.

In 1989 his entrepreneurial inclinations urged him to return to Ghana. Once again he established his own business, this time in the transport sector, under the name Transpomech International (Ghana) Limited.

Enstoolment on the Golden Stool

The overwhelming support and universal acclaim he enjoyed from the chiefs and people of the kingdom cemented his choice as the next Asantehene. Consequently, Otumfuo Osei Tutu II was enstooled as the 16th occupant of the Golden Stool on April 26, 1999.
Source: graphic.com.gh