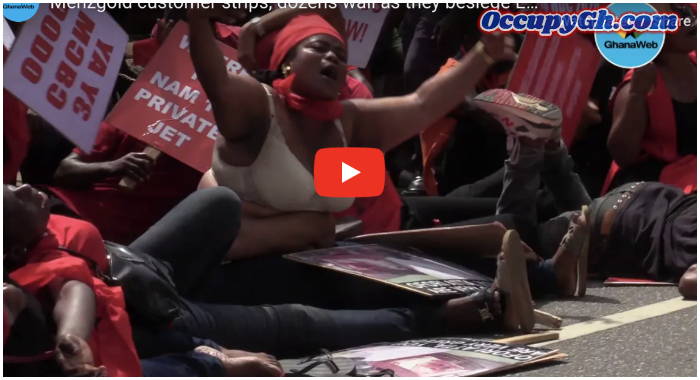 Scores of aggrieved Menzgold customers today besieged the office of the Economic and Organised Crime Office (EOCO) to demand the liquidation of the seized assets of the company and Menzgold boss, Nana Appiah Mensah. (Video below)

One of the customers’ who couldn’t hide her frustration any longer took off her shirt as she joined others seated on the floor to wail. Attempts by her colleagues to cover her up proved futile as she kept pushing the cloth off.

The customers demanded that, EOCO must publish the list of all properties they have confiscated from NAM 1 and his company to settle the debt owed its customers.

Calling for transparency from EOCO, the aggrieved customers lamented that “We are here today because EOCO has gone for court order to preserve NAM 1 and Menzgold assets for which reason we are here to demand from EOCO to be very transparent and fair with each investigation and we are asking EOCO to publish the list of the items that they’ve confiscated and the list of the properties, the cars and then the amounts in the various accounts. We want fairness to prevail in this country, we know how the police and EOCO have disappointed people in this country; today we are calling for fairness”.

Another customer who also invested huge sums of money into the gold dealership firm also complained bitterly stating that “We’ve said a lot since the issue started but seriously it’s so disappointing that the government is not doing anything to about our issue. That man (Akufo-Addo) has to step up, he has to step up because what they’re doing it’s like they’re playing us, they’re playing games with us…We’re not kids, the money involved here is not that money of DKM, it’s not God is Love money, this money is huge and we’re not going to leave it for them. If they think they’ll take this money I swear they’ll vomit it out. We are ready and this time if we’re coming again, I’m telling you it’s not going to be easy; the police should prepare and wait for us because if we’re coming again, we are coming with war and they have to meet us and kill us”.

After leadership of the Coalition of Aggrieved Customers of Menzgold presented their petition to EOCO, the Deputy Executive Director of the crime office, Nana Antwi assured customers of preserving the properties of NAM 1 for their own benefits.

According to EOCO’s Deputy Executive Director, assets of NAM 1 can’t be published in the media as requested by the coalition and payment will only be made when the Attorney General gives them permission to sell off NAM 1’s assets but for now, their duty is to preserve his assets.

“We went through the petition with them, there are some of the issues we were able to address, there are others we made them aware that it was not within our purview to speak to them to the issues. But there was one fine assurance and the assurance is that we have and will continue to use all the information that you have given us to preserve all the properties of that company that has run into challenges for which you’re here today; that one we will do”, he noted.
Source: Ghanaweb.com