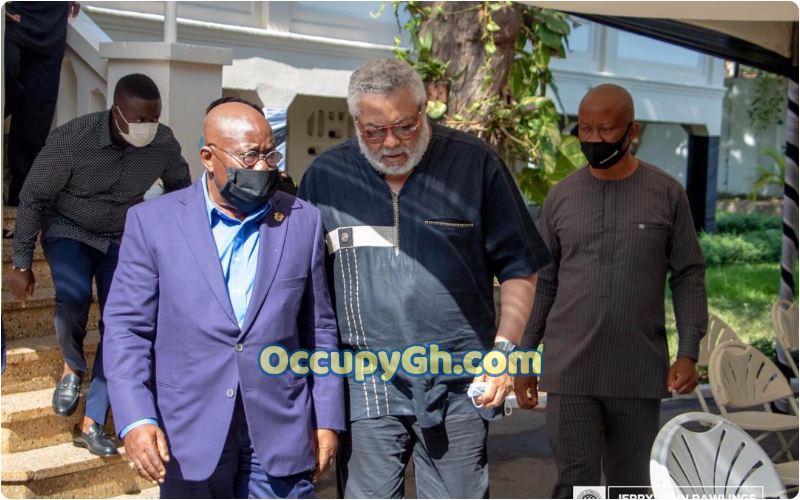 The president of Ghana, Nana Akufo-Addo paid his last respect to the late former president Jerry John Rawlings on Wednesday, 27th of January, 2021

This is a full text of Nana Akufo-Addo’s Tribute to the late former president of Ghana JJ Rawlings.

He burst onto the scene like a meteor, but a meteor that did not burst into flames and disintegrate like all meteors do. On the contrary, it remained potent until the very end of its life, leaving strong footprints in the sands of time.

The turbulent occurrences of the 1970s in Ghana – the overthrow of the 2nd Republic and the Progress Party Government by the military coup of 13th January 1972; the takeover of power by the Col. I.K. Acheampong-led National Redemption Council and, subsequently, the Supreme Military Council; the proscription of multiparty democracy; the professionals’ strike of 1976; the March 1978 Referendum on the proposal to entrench military rule through the Union Government concept; the formation of the People’s Movement for Freedom and Justice (PMFJ) to mobilise the ‘No Vote’ in the Referendum; the consequences of the vote, and the conspiracy to abduct the Electoral Commissioner; the palace coup that removed Gen. Kutu Acheampong from office and ushered in Gen. Fred Akuffo in his stead – culminated in the emergence of Flt. Lieutenant Jerry John Rawlings in the political space of our country.

Charismatic, energetic, fearless leader. Such were the attributes ascribed by many Ghanaians to the man, Jerry John Rawlings, the young air force officer, who announced his presence in Ghana’s politics by the abortive coup of May 15, 1979, and was sentenced to death for his part in the failed effort. He gave, at his trial, an important insight into his character, when he stood up, before the military tribunal, to accept sole responsibility for the attempt, and to request the NCOs, who were being tried with him, to be absolved and freed by the tribunal.

The great events that were to define his career followed quickly after his trial, conviction and sentence. Three (3) weeks later, whilst awaiting execution of his sentence, he was dramatically freed from prison by the insurgents of what has come to be known as the June 4th Uprising, when junior officers and other ranks of the Ghana Armed Forces banded together to throw out the Supreme Military Council, and install the Armed Forces Revolutionary Council (AFRC), headed by Flt. Lt Jerry John Rawlings, thereafter ‘J.J’ to all and sundry in Ghana. It is no wonder that he came to regard June 4th as “that divine day”.

He re-emerged as Chairman of the Provisional National Defence Council (PNDC), when he led the successful coup that brought the short-lived 3rd Republic to an end on 31st December 1981. The tumultuous, and at times lawless, incidents of the AFRC’s three (3) month tenure of office, and of the early years of PNDC rule, are matters of record, winning him passionate admirers, vociferous critics, and determined lifelong enemies, all at the same time.

He was the longest serving ruler in our history – eleven (11) years as a military leader, and eight (8) years as a twice elected civilian President, making nineteen (19) years in all. He was fortified in his work by his union with his celebrated consort, the equally dynamic Nana Konadu Agyeman Rawlings, who proved to be a sturdy pillar and invaluable companion to the very end, and who bore him four (4) children, the eldest of whom, Zanetor, is continuing his tradition of public service.

It was no secret that the relationship that existed between the two of us, right from the heady days of 1979, through to my brief period in exile, his assumption of office as the 1st President of the 4th Republic, the historic Kume Preko demonstrations, my period as Attorney General and Minister for Foreign Affairs in the Kufuor administration, to my being elected 2008 NPP presidential candidate, was one of open animosity. We did not see eye to eye!!

However, with time, things changed. We came to see value in each other, and understood, to a very large degree, our respective perspectives. One thing we had in common was our mutual commitment to public service.

My visit to his Ridge residence in 2012 signified the easing of tensions between us, leading to a friendship that lasted for the better part of some eight (8) years. Indeed, when the Ghanaian people, in 2016, reposed, for the first time, their confidence in me in the elections of that year, one of the first persons on whom I paid a courtesy call was His Excellency Jerry John Rawlings.

From my entry into office, right up to the day he was called by his Maker, he remained a good friend and a repository of sound advice. I knew that, in moments of difficulty in my presidency, I could count on his considerable wealth of experience and knowledge. On those occasions, he came through for me.

There was a symbolic gesture he advanced to me at the funeral of his late mother, Madam Victoria Agbotui, held at the Forecourt of the State House on 24th October 2020. It was to be our last time together. He was called up by the clergy to receive special prayers as the only surviving son. He told the men of God to wait and called for me to walk up to join him to receive the special prayers. He whispered to my ears as I stood beside him: “I reminded them that they should pray for you also because you had also lost your mother.” I was touched by this.

It is for good reason that his well-known, oft-cited ideals of “probity and accountability”, in which he invested a great deal of his political capital, have been enshrined in the Constitution of the 4th Republic, and, together with “Freedom and Justice”, the words of our nation’s motto, constitute the foundational principles on which social order is to be developed in Ghana.

There are many who acknowledge him as the Founder of the 4th Republic, a Republic which has proved to be the most enduring and stable in our history, and which has witnessed eight (8) successive elections, three peaceful changes of government from one party to another, and five Presidents. For all his revolutionary antecedents, he set, in 2001, the enviable precedent, which has, since, guided our country, of respecting the two-term limit of the Presidency and superintending the orderly transfer of power to his democratically-elected successor.

Whilst he was with us, he, respectfully, declined an offer I made to him, in 2017, to have the University of Development Studies, Tamale, (UDS), which he, personally, helped establish, named after him. His reason was that, in adhering to a long-standing principle, he did not want to have any national monument or facility named after him. Two days after his passing, at the 21st Congregation of UDS, I expressed my strongest convictions, in spite of his reservations, that such an honour should be accorded him. I am glad that this has found favour with his family, and the necessary formalities will be carried out to achieve this, i.e. The Jerry John Rawlings University of Development Studies, Tamale.

Such is the measure of the man that the days associated with his political interventions in Ghana, i.e. 15th May, 4th June, 31st December, and 7th January, are now significant days in the calendar of the nation. But, the most significant of them all must be 7th January 1993, the day that ushered in the 4th Republic. It is in recognition of this that I decided to commemorate 7th January as Constitution Day on the national calendar. It is, perhaps, the greatest tribute a grateful nation can offer to the men and women whose efforts led to the establishment of the 4th Republic. It is my hope and prayer that he remains, forever, the longest-serving Head of State in our nation’s history, for that would mean that the 4th Republican Constitution and its enshrined term limits have endured.

His actions were not limited to Ghana only. The African nationalist that he was, he held unwavering positions on all matters concerning the wider continent of Africa, especially when they involved foreign interference and control of Africa’s destiny, and was quick to voice his views on them.

His chairmanship of the ECOWAS Authority of Heads of State and Government set the example, whereby virtually all his successors, John Agyekum Kufuor, John Dramani Mahama, and I, the 2nd, 4th and 5th Presidents, respectively, of the 4th Republic, have been honoured by their peers with the occupancy of that high office, reinforcing the pan-African vocation which has been an essential element of Ghanaian public policy since independence.

I called him ‘Comandante’, because of his admiration for the famous Latin American revolutionaries, Fidel Castro, Hugo Chavez, and Daniel Ortega, a nickname which seemed to please him.

I believe that history, on balance, will be kind to him, and will render a positive verdict on his contribution to the evolution of our nation, and the entrenchment of its democratic institutions and culture. It is entirely appropriate and fitting that he should receive a State Funeral with full honours to express the gratitude of the nation for that contribution.

My wife Rebecca and our children join me in expressing our sincere, heartfelt condolences to his beloved wife, Nana Konadu, his children, Ezanetor, Yaa Asantewa, Amina, and Kimathi, and his entire family, for their great loss of one of the outstanding figures of modern Ghanaian history, a man whose sense of humour was truly infectious.

‘Comandante’, rest and abide in perfect peace in the bosom of the Almighty, until we all meet again on the last day of the Resurrection.

Farewell, God bless, and thank you for all your help.