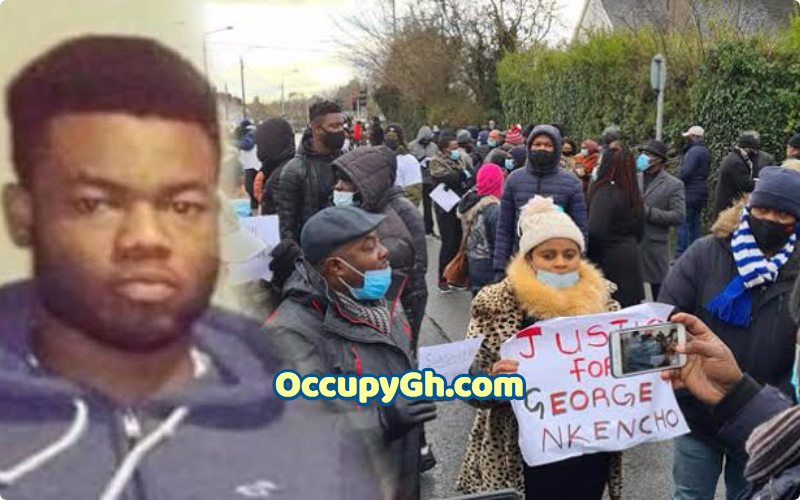 George Nkencho, a 27-year-old Nigerian man, was reportedly shot six times by Irish police in Dublin, Ireland just outside of his family home.

George Nkencho went to Ireland with his family when he was seven-years-old. His death has led to a series of peaceful protests by the Nigerian/immigrant community in Ireland, especially in Dublin, Cork, and Navan demanding that the culprits should be brought to justice.

According to Dublin Live, the postmortem identified the interim cause of Nkencho’s death to be two fatal gunshots to vital organs. It was learned that five shots penetrated his torso with another passing through his arm.

An email sent to the deceased family by Garda Siochana Ombudsman Commission (GSOC) with the postmortem results confirmed that “injuries noted at the postmortem examination were that it appears that six shots were aimed at the central mass [torso] and of those shots, one went through George’s arm and did not go into his chest”.

“The interim cause of death was two fatal gunshots, which caused damage to vital organs.”

The Irish police claimed that its officers shot the Nigerian man for allegedly refusing to surrender a knife that he was holding.

Gardai said, “The Armed Support Unit was also threatened with a knife and implemented a graduated response where the use of less-lethal force options (taser and OC spray) was initially administered to resolve the incident. The less-lethal use of force options was unsuccessful.

“At approximately 12.35 pm, a member of the Armed Support Unit discharged several shots from his official firearm shooting the male.”

Nkencho killing attracted condemnations and protests in the country and Nigeria with a petition launched online to seek justice for him.

Tweets on social media compared the Nigerian’s killing to high profile events in the United States, involving the death of black people at the hands of the police.

In a statement on Twitter, Nkencho’s sister Gloria said her brother was “suffering from serious mental illness and those who knew him know the type of person he was, he was not a thug nor a criminal.

“My siblings and I have witnessed the most traumatic experience of our lives as our brother was shot in front of us. I kindly ask (you) to refrain from sharing the video of the shooting. It is not something I wish to be reminded of.”

The Nigerians in Diaspora Commission (NIDCOM) had strongly condemned the killing of Nkencho and called for an investigation.

A statement from the Chairman, NIDCOM, Abike Dabiri- Erewa described the killing as callous and called for a thorough and fair investigation.

However, family sources said neither Dabiri-Erewa nor the Federal Government has contacted the family to condole with them over their loss since the incident occurred.

In this article:Crime, George Nkencho, Ireland