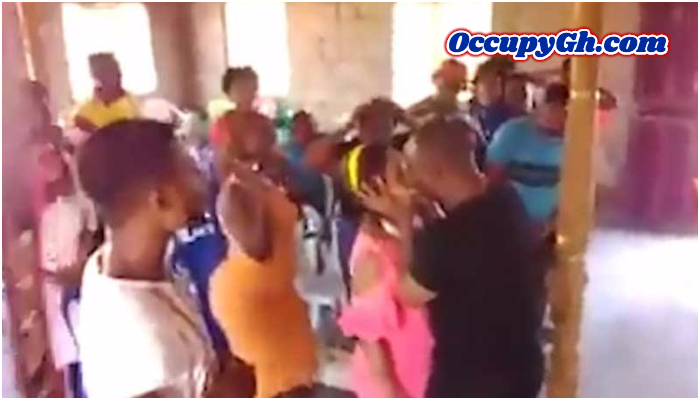 Bizarre footage shows a pastor kissing a young woman on the lips in church all in an attempt to “rid her body of demons “. (Video below)

The clergyman is seen embracing the woman in a pink dress in front of his congregation. Local media claims the pastor had discussed the soul in the sermon at a church in Zimbabwe.

And it’s said he demonstrated a way to cleanse the spirit – by locking lips with the woman. The video captures the awkward kiss last for an uncomfortably long time in front of the church members.

Two women in the front row hold their hands to their heads. The woman in pink eventually sways and gestures at her stomach. But the pastor goes back in for a second kiss in the clip.

The camera pans toward a woman in a green cardigan standing behind a short distance behind the pastor.

The video uploaded by Raymond Majongwe who captioned the video: “Pastor at work. Hale luuuuuyaa”. One commenter asked: “I wonder if he does the same to his male congregates?”

One priest previously told Mirror Online how he can tell if someone is possessed by a demon. Father de Meo, an exorcist of 64 years’ standing from Foggia, Apulia, south-eastern Italy, says prayer is the key to establishing what ails a presented person.

The exorcist will typically say a “prolonged prayer to the point where if the adversary [demon] is present, there’s a reaction,” he said.

Watch video below of Pastor kissing a woman in church…

In this article:Bizarre, Crime, Pastors