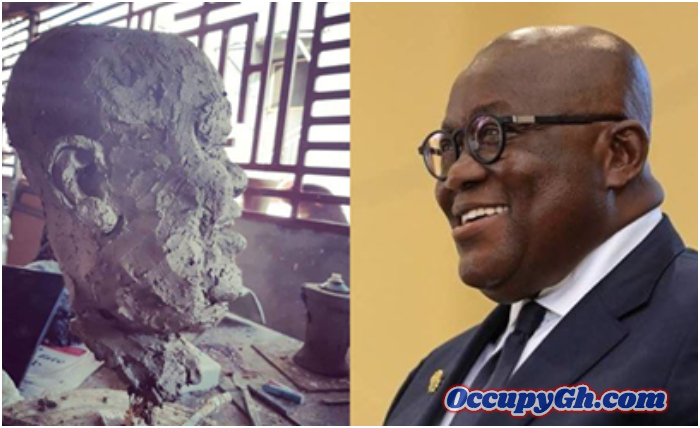 A clay artwork believed to be of President Nana Addo Dankwa Akufo-Addo has popped up on social media and it is fast going viral.

In a photo sighted, the artwork which is expected to be a bust was in its mid-stages with the head part almost complete. The figure is of a bald-headed man with a bulky face.

It is not yet known where the photo was taken but information gathered by YEN.com.gh indicates that the artwork is coming from the camp of the same sculptor who recently did a bust of Shatta Wale.

Since the photo popped up, there has been a general assumption that the sculptor is creating a bust of President Akufo-Addo even though the photo does not clearly state that.

Based on this assumption, social media users have been passing many comments on it. Adam funnily said Akufo-Addo’s head was the cause of the cedi’s depreciation:

Mall asked the government to send the BNI to stop the sculptor from completing the bust:

Isaac described the photo as head of state:

It will be recalled that a photo of the clay art of Shatta Wale caused a frenzy on social media a few weeks ago.

Just like Akufo-Addo’s own, the peculiarity of the Shatta Wale’s bust made it go viral and got social media users really talking about it.