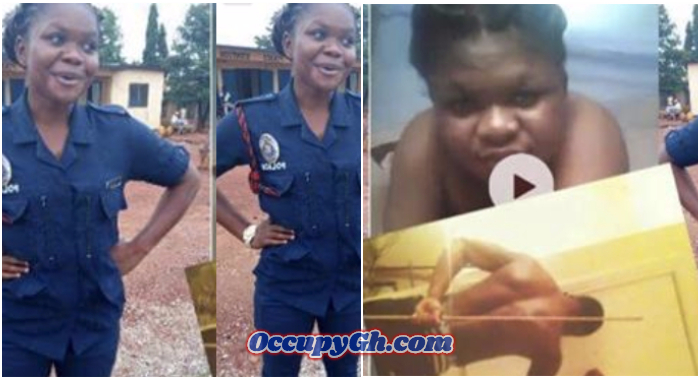 One of the biggest news in Ghana for days now is the leak atopa tape of the Sunyani based police constable. The m*[email protected] video of the police officer was leaked on social media on Wednesday, 17th April 2019.

The lady in the video has finally broken her silence after she went into hiding when the video leaked online. According to the remorseful police officer, she is shocked that a private video which was meant for her boyfriend could find her way into the media at her blind side.

She revealed that the video was meant for her boyfriend who is based in Italy as reported by Ghpage.com. She was supposed to send the video by Whatsapp but she faced challenges sending the video to her boyfriend, James.

She, therefore, sought the help of a friend who unknown to her saved a copy of the video and had been blackmailing her. Unable to raise the amount demanded from her, the person leaked the video to other friends and it finally ended on social media.

“I am very sorry for my conduct but this is what really happened. I am pulling myself to together and have learned a lot of lessons. I do not even think I will want to own a phone with a camera”, the police officer told the media.

In the video which went viral, The police officer believed to be a police constable was in the video alone and the kind of things she was doing in the about 6 minutes video is absolutely sickening.

She started by fondling her boobs, then rushed to locked her door and what followed was disgusting, she was seen in the video [email protected]*ting like there is no tomorrow.