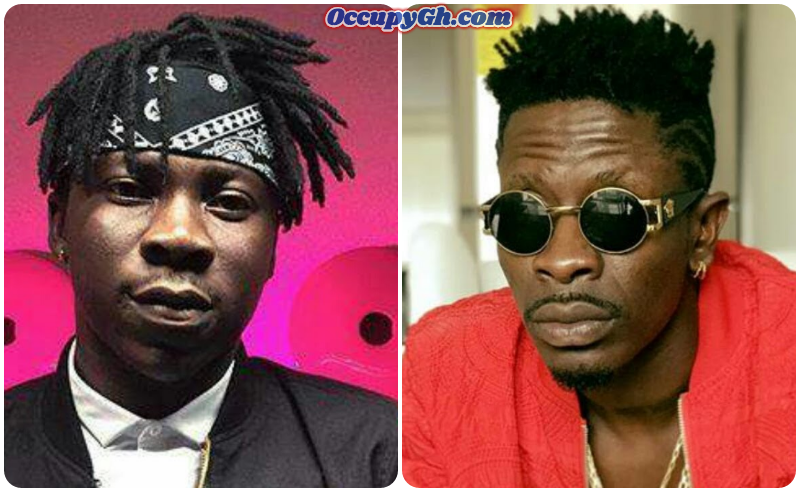 Report reaching us at OccupyGh.com indicates that Ghana Police has subsequently seized guns belonging to both Shatta Wale and Stonebwoy following a brawl that happened at this year’s VGMAs.

A full report sourced from Daily Guide below;

The two rival dancehall artistes – Charles Nii Armah Mensah, also known as Shatta Wale, and Livingston Etse Satekla, whose stage name is Stonebwoy, who were arrested for causing chaos on stage during the 20th edition of the Vodafone Ghana Music Awards last Saturday – will be put before a court today.

They have provisionally been charged with three counts: offensive conduct, acts tending to disturb public peace and unlawful display of firearms in a public place.

The two popular musicians were arrested on Sunday and denied bail until Monday evening when they were granted bail.

The Greater Accra Regional Police Command said the two would be arraigned in Accra today.

Police sources say Shatta Wale had a gun on him during the scuffle but did not brandish the weapon like Stonebwoy.

The police have since retrieved both guns.

The source said Stonebwoy, in his caution statement, admitted that the gun was licenced.

“He was then asked to produce documents to back his point,” the source said.

The police then took Stonebwoy to his residence at Ashaiman, near Tema, to conduct a search.

The police are also said to be on the heels of the man who reportedly handed over the gun to Stonebwoy on stage.

Around 11 am yesterday, Shatta Wale was brought to the Regional Police Command in the company of his lawyer to give his statement.

He was said to have been detained at the Ministries Police Station after the incident even though others claimed he was held at the Tesano Police Station.

Stonebwoy was also believed to have been held at the Dansoman Police Station.

Shatta sat quietly as his lawyer moved from one office to another to secure his release at the Regional Police Command yesterday.

Meanwhile, another suspect in the matter called Nii Amoo, who was arrested for allegedly discharging pepper spray during the chaos, was still in police custody yesterday.

It was an exhibition of sheer lawlessness on Saturday night when Stonebwoy pulled a gun on stage after Shatta Wale and his entourage charged on him.

Stonebwoy, with his ‘army’ called Bhim Nation, and Shatta Wale with his ‘militants’ called Shatta Movement or SM for Life,’ engaged in fisticuffs on open stage during the VGMA ceremony, which was telecast live on TV3 and DSTV to more than 43 countries.

BREAKING:  If You See The Tea and Milo Flagstaff House Did For Me - Shatta Wale Reveals

Some music-loving fans and other patrons were said to have sustained injuries in the ensuing melee.

The pandemonium started after Abeiku Santana was called up stage to present an award to the Songwriter of the Year.

After introducing himself, Abeiku then notified the audience that he was on stage to rather present the award for Reggae/Dancehall Artiste of the Year, which was won by Stonebwoy.

While going on stage to pick his award, Stonebwoy showed gestures to the TV cameras and allegedly to Shatta Wale to literally prove that he had won that category over him for five times.

Shatta Wale and his ‘militants’ then rushed onto the stage when Stonebwoy was about to give his acceptance speech for winning the category.

Stonebwoy’s manager, Blakk Cedi, was seen preventing Shatta’s crew from getting to Stonebwoy, who then pulled a gun to also protect himself from possible attacks.

Strangely, before Stonebwoy was declared winner of the reggae/dancehall artiste of the year, Shatta had won two awards but in all of those, he sent representatives to pick them for him.

It was, therefore, bizarre that Shatta and his ‘militants’ could move menacingly on stage when he was not the recipient of the award, making the audience believe he was going there to cause trouble.

Some of his followers are claiming he wanted to go on stage to ‘congratulate’ his fiercest rival Stonebwoy, but many people are blaming Charterhouse, the organisers of the VGMA, for the incompetent manner in which it handled the entire event.

“Preliminary investigation, however, reveals that the disturbance occurred after Livingston Etse Satekla @ Stonebwoy was declared winner of the Reggae Dancehall Artiste of the Year Award and had mounted the stage to receive his award. Charles Nii Armah Mensah @ Shatta Wale also moved on stage uninvited, provoking a scuffle between them and their supporters,” it said.

“The event organisers and all suspects are cooperating with the police and those found culpable will be arraigned in due time,” it added.