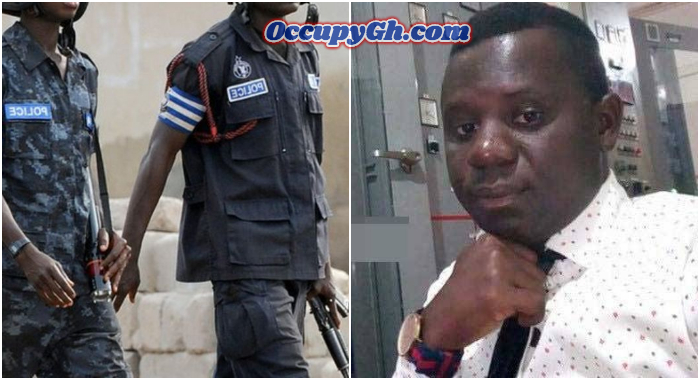 A gentleman has been shot in the thigh by Nyinahin Police in the Atwima Mponua District of the Ashanti region after they assumed he was an armed robber because he did not stop when he was signaled to stop by the police. They shot him in the thigh and left him to die.

The young man, Mr. Maclean Amoah, a worker with the Ghana Grid Company (GRIDCo) at Sefwi-Asawinso in the Western North Region is battling for his life at the Komfo Anokye Teaching Hospital, Emergency Unit, Kumasi.

Narrating his ordeal at the hospital where he is undergoing surgery, Maclean Amoah revealed that he was driving around 10:00 pm on the Kumasi-Bibiani road when he spotted a BMW saloon car giving him a hot chase. For fear of his life due to the numerous armed robbery cases recorded on that stretch, he refused to stop.

He drove to a safer place and stopped. It turned out it was the police chasing him. One officer, Chief Inspector Gyekye walked to where he hard parked from the BMW Saloon car and shot him in the thigh at no provocation, seized the car and his phones and left him to die.

Accoriding to the police, he failed to stop at the police checkpoint giving the signal that he might be an armed robber. Maclean Amoah was driving alone in his car with the registration number, GN 1124-12 on that day, 31st March 2019.

Residents of the town where he was left to die threatened to kill him when they found him because they feared he was an armed robber who had taken a bullet from the police and was escaping. But he was later rushed to the hospital when he narrated his ordeal to the people.

The wife of Maclean Amoah who is a police officer at Dorma in the Bono East Region and his family are outraged about the treatment meted out to their husband, son and are demanding justice.

Meanwhile, Maclean Amoah is set to undergo plastic surgery at the Komfo Anokye Teaching Hospital. The police, however, insists he is an armed robber but has started an investigation into the shooting.