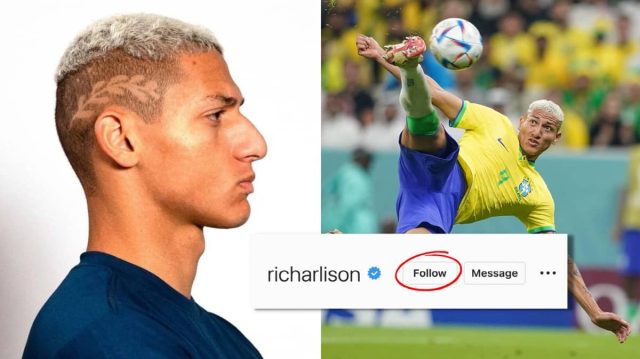 After a tense first half, Richarlison handed Brazil the lead just after the hour mark after Vanja Milinkovic-Savic deflected Vinicius Jr.’s shot into his path.

Richarlison scored his second goal of the game eleven minutes later with a beautiful acrobatic effort.

Vinicius placed a floating outside-the-boot cross inside the box, which Richarlison initially found difficult to control before soaring into the air and firing a stunning volley.

It represented Joga Bonito’s zenith. The strikes have thrust Richarlison into the international spotlight, and his social media presence is growing at an incredible rate.

At the start of the tournament, Richarlison had almost 8 million followers. Since receiving his brace, this number has risen to 11 million followers, according to his social media following.

If it doesn’t prove that the World Cup is the biggest stage in sports, we’re not sure what would.

Richarlison has established himself as the team’s primary striker despite the depth at the top of the Brazilian team’s starting lineup.

Gabriel Jesus, Gabriel Martinelli, Antony, and Rodrygo were among the players on the substitutes’ bench while Roberto Firmino opted not to travel to Qatar.