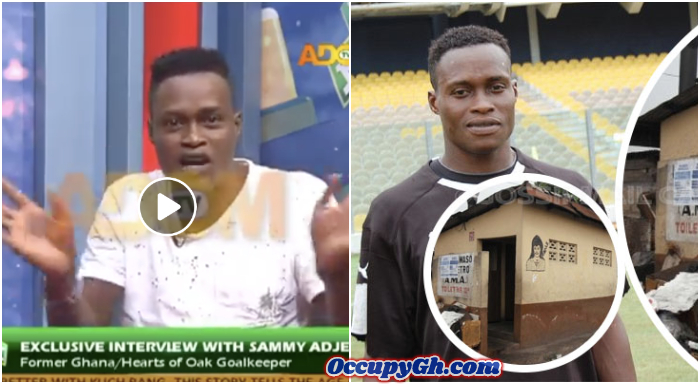 Former Goalkeeper of the senior national team, the Black Stars, Sammy Adjei, has debunked rumors that he is a manager of a public toilet at Labadi, a suburb of Accra. (Video below)

It was reported last year that ‘Barthez’, as he is affectionately called in football circles, is now a manager of a public toilet at Labadi.

The revelation was made by Laryea Kingston, a playing mate of Sammy Adjei, who confirmed the news on Football Legends Night Show on GHOne TV.

Laryea, however, added that he was unaware if Adjei was still in the KVIP business.

But speaking on Adom TV’s Sports Programme, ‘Agoro Ne Fom’ on Wednesday, the former goalie denied the claims, saying he has never managed a toilet facility and has not built one.

He wondered why Laryea Kingston who he described as his ‘best friend’ would come up with such fabricated story to tarnish his image.

“Laryea Kingston is a liar. I have not told him anything about owning a toilet facility. I don’t have a toilet facility and not a manager either. Laryea has really tarnished my image by sitting on TV and defaming me. I was really worried when I heard him on YouTube talking about it.

BREAKING:  WOW! McBrown And Her Husband Travel To Qatar To Cheer On The Blackstars (VIDEO)

“Laryea is my friend but I’m very disappointed in him because he failed to ask me before deciding to run to the public and run me down. I know that owning a public toilet is a lucrative business but I want the whole world to know that I haven’t built any toilet”, he said.

Sammy Adjei played for Accra Hearts Of Oak in the Ghana Premier League before becoming Black Stars’ number one goalkeeper in the early 2000s.

JOIN Us on WhatsApp For BREAKING News