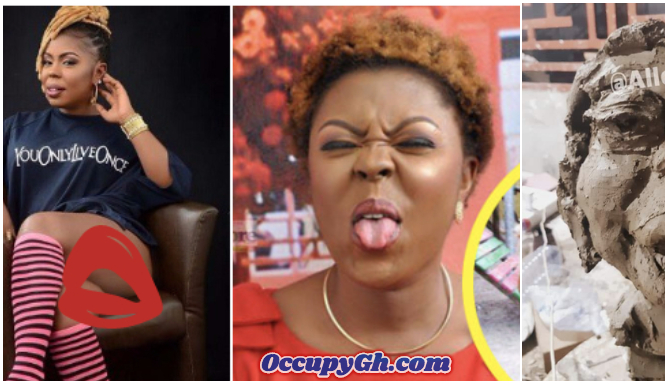 A clay artwork believed to be that of TV personality Afia Schwar has surfaced online.

In a photo sighted by YEN.com.gh, the artwork which is expected to be a bust was in its mid stages with the head part almost complete.

However, it is unknown where the photo came from but information gathered by YEN.com.gh indicates that the artwork is coming from the camp of the same sculptor who recently did a bust of Shatta Wale and President Akufo-Addo.

Since the photo popped up, many users have assumed that the sculptor is creating a bust of Afia even though the photo does not clearly state that. But social media users are of the view that sculptor is the controversial on-air personality.

It will be recalled that a clay art photo of Shatta Wale caused mixed reactions on social media some few weeks ago.

Just like Afia’s own, the peculiarity of Shatta Wale’s bust made it go viral and got social media users talking about it.

Check out the sculpture below or visit  OccupyGh.com for more stories.