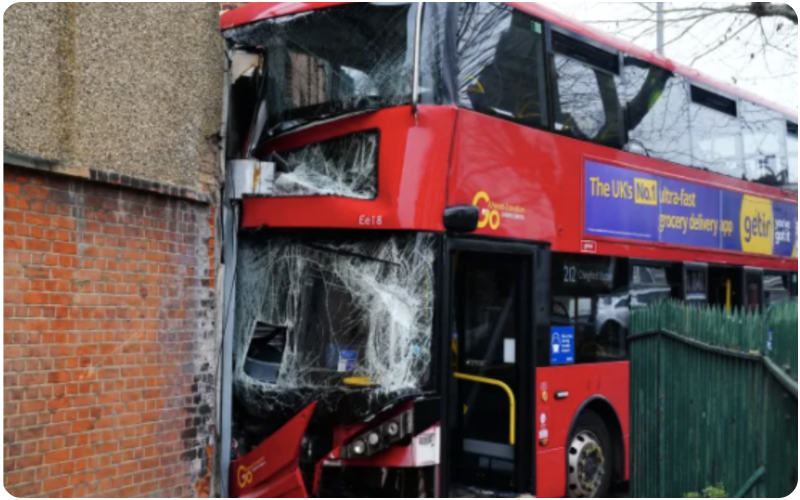 Scores have been reportedly injured after a double-decker London bus crashed into an appliance store during rush hour.

Paramedics rushed to the scene in Higham’s Park, East London, after the vehicle crashed into the building.

The 212 bus smashed into the On Appliances store at around 8am this morning, with several passengers being treated for injuries.

Emergency services were called to the scene after the incident on Selwyn Avenue, in Chingford.

The driver of the bus had to be cut free from the vehicle and has been taken to hospital.

“Road closures remain in place around the junction of Selwyn Avenue and Winchester Road.

“Inquiries into the circumstances remain ongoing.”

The front of the store appeared to be partially destroyed, as paramedics treated several patients at the scene.

London Ambulance Service spokesman said: “We are on-scene and are treating a number of patients at an incident on The Broadway in Highams Park, E4.

“Where a bus has collided with a building. Crews are working closely with partner agencies and we will share more information when we can.”

“Emergency services are on the scene – please be patient if you are in the area. We will share more info as and when it arrives.”

London Fire Brigade currently has two fire engines on the scene and a rescue unit assisting.

“Crews made the scene safe and have carried out a systematic search of the building to ensure there are no other casualties trapped.

“There are local road closures in place around the junction of Selwyn Avenue and Winchester Road and we would ask people to avoid the area where possible.”

Mayor of London Sadiq Khan said his thoughts were with those affected by the “terrible” incident.

He tweeted: “I’ve received reports this morning of a bus crashing into a building in Highams Park in Waltham Forest.

“Emergency services are currently on the scene-we will share more information as soon as we have it. My thoughts are with everyone affected by this terrible incident.”

In this article:Accident, London, United Kingdom