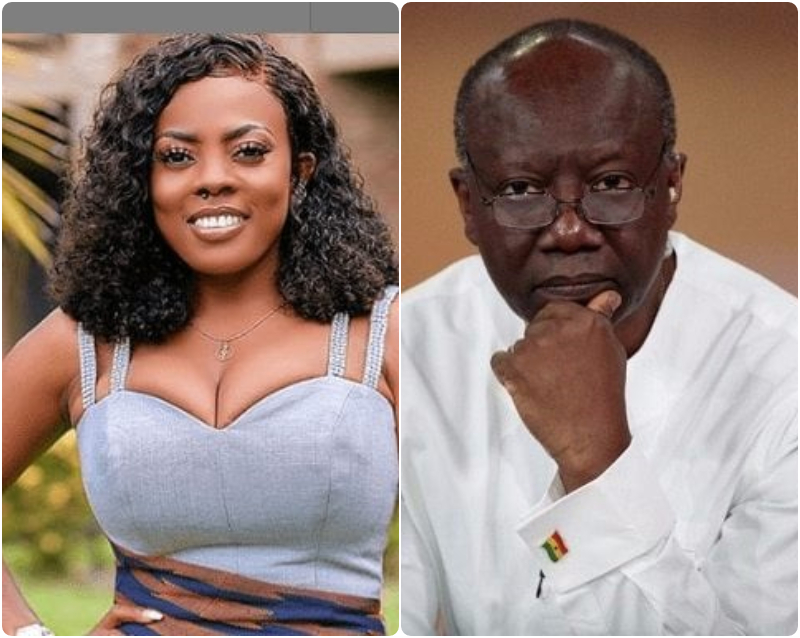 Nana Aba’s message in the letter is very simple – she wants ‘incompetent’ Ofori-Atta to resign.

This comes at the dire situation where Ghana’s economy is dwindling amidst a bad-performing currency against the U.S dollar.

On any day I’d like to see through this Friday with excitement, do well with my commitments and settle in for a weekend of relaxation with full knowledge that all is good.

But you have decided to undo all of that.

Thanks to you, millions of Ghanaians and business owners have been robbed of honest gain for honest work.

Your incompetence has seen the value of our work depreciate at an alarming rate.
Before this week, depreciation was over 40 percent and inflation also close to that same percentile.

A cursory glance at everything and it’s another reason to be angry because you have willfully provoked us with your abysmal management.

At the National Forum on the Economy at the Accra International Conference Centre in 2017, you were unambiguous that you will work tirelessly to ensure all Ghanaian businesses flourish courtesy your competent leadership. I believed you. So did many Ghanaians.

Six years down the line your fruits are bitter and eery.

Before you gasp and reach for an explanation, don’t stretch and touch the COVID pandemic plus the Ukraine Russia crisis as a wall for balance and your cushion for solace. You lot sound like a broken record.

The world suffered same but your imprudent borrowing taste and wasteful use of those flammable funds has led us to this point.

The economic heat has broken the thermometer this week. The heartbeat has a new competitor in the Ghana Cedi. It is beating faster than the throb of the spongy organ. And you unashamedly ask us not to panic? Wow!

You may be in the company of finance ministers at the IMF Spring Meetings and looking for that “miracle” with your negotiations. But the ‘Ghanaian’ brother you sat next to, Kwesi Kwarteng, has fallen on his own sword for introducing policies which could have further crippled the British economy. He took the early steps to a political fiasco before his boss and now former PM, Liz Truss followed suit.

You on the other hand against all the clear public wails of the majority of your people continue to hold on to a job you’ve woefully failed at and leading a process you don’t believe in (going to the IMF) after failing to properly introduce a new tax line, E Levy and borrowing us out of the international financial market.

Hmmm. Maybe a part of you wants to leave and your cousin is backing you to the hilt on the altar of loyalty.

But for God’s sake, spare the entire nation this prolonged spectacle of failure and let go of the burning rod.

If you were leading a private company managing private funds with this current performance you probably would have walked. In fact, you would have been fired. This time it’s public funds and the stretch of the impact is much more.

Alex Vignet’s words ring true that “resignation is the courage of Christian sorrow”. All Ghanaians are weeping and as a devout believer, wouldn’t you rather resign and save us all from further ignominy?