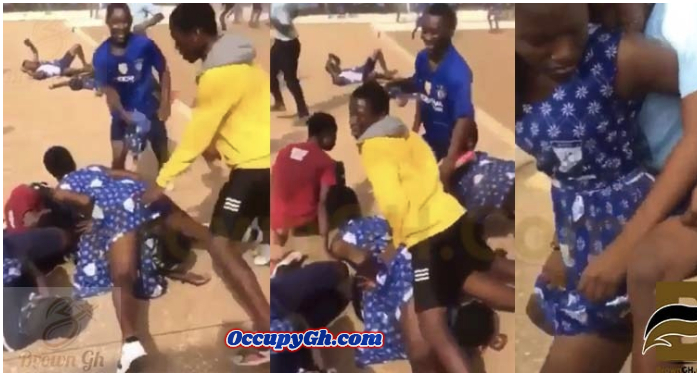 A female senior high school student has caused a stir on social media after a video of her dancing in a sexually suggestive manner popped up online.

In the video sighted by OccupyGh.com, the beautiful girl who was in a school uniform was seen lying on top of other students who were also in the same uniform as they dance to Medikal’s Omo Ada hit song.

While lying on her colleagues, she gesticulated like a man thrusting during intercourse. This invited one guy come and lie on her and do the same gestures before she got up on her feet.

Still dancing after getting up, the girl invited another boy in uniform to come and dance with her. And she turned to give her backside for the boy to grind.

Looking like she was not satisfied with the grinding, the young girl helped to raise the boy’s left in order for him to hold on to her and grind better. It is not known where the dancing took place but from the video, it could be deduced that ground was a school’s campus.

The video has gathered a lot of attention on social media with many expressing mixed reactions.

In this article:Dance Videos, Medikal