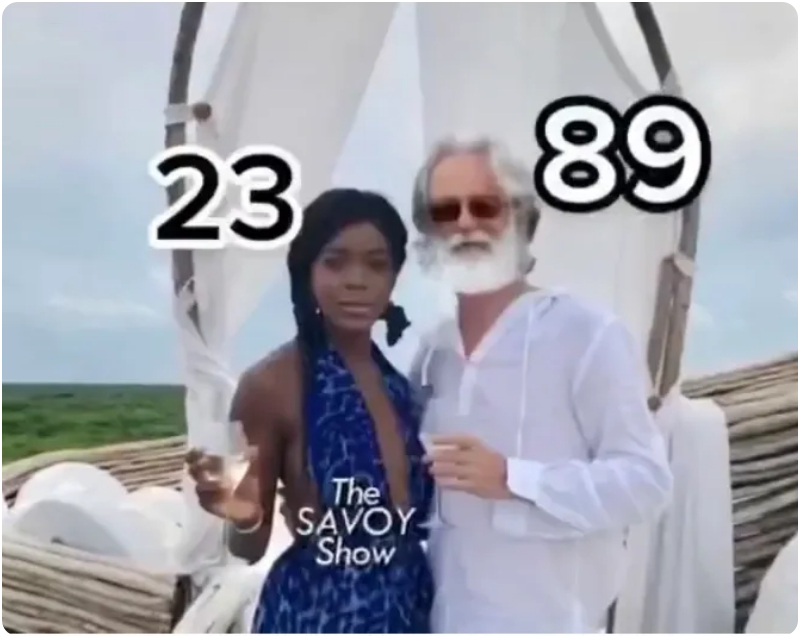 'Ago Date Your Father': Slay Queen Dumps Boyfriend To Marry His 89-Year-Old Father

This situation brings back memories of Ghanaian singer Ebony’s song – ‘I Go Date Your Father’.

A 23-year-old slay queen has gotten social media buzzing after she dumped her boyfriend to marry her boyfriend’s 89-year-old father because the fiance cheated.

The Nigerian woman was dating a Caucasian man, and he decided to look elsewhere for other women. He cheated on his girlfriend, and she did not take this lightly and decided to spite him for life.

She successfully seduced her “father-in-law” until he decided to marry her and have a stunning wedding.

The 23-year-old slay queen said in a video reposted on YouTube:

In one of the pictures, the lady was wearing a blue sleeveless dress while holding a glass of wine. She had no regard whatsoever of the 76 years difference between her and her new man.

Her new “husband”, whose hair colour was tinted and beard shaved to make him appear younger, was wearing a white shirt and trousers, with one hand holding a glass of wine while the other hugged his new wife and former “daughter-in-law”.

The second picture was of the couple’s wedding day, and she showed what she is made of.

The wedding ceremony took place on a ship. The 23-year-old slay queen was tw3rking and whining for her new 89-year-old husband in a glamorous white gown with an open back.

The husband, clad in a white shirt, black trousers and a maroon tie, was excitably grinning as he stared at his new wife’s behind.