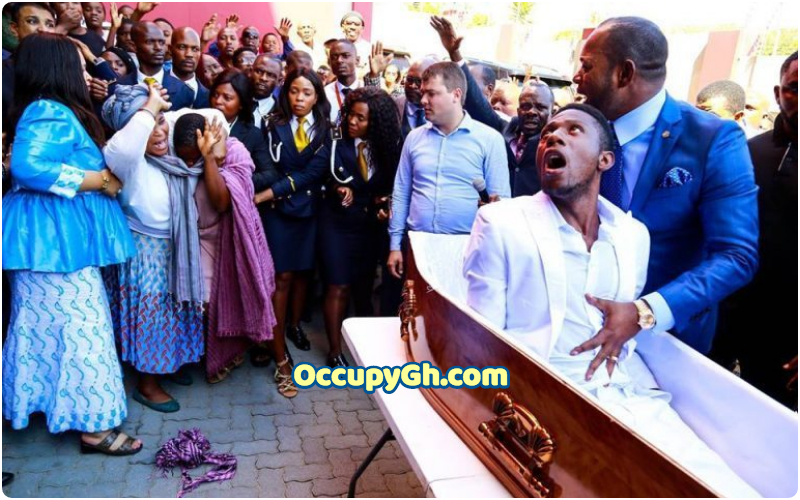 A group of funeral directors in South Africa say they will sue a self-styled prophet who claims to have resurrected a dead man.

A viral video of Pastor Alph Lukau shows him shouting “rise up” to a man lying down in a coffin who then jerks upright to cheers from worshippers.

The funeral companies say they were manipulated into being involved.

The spectacle, seen outside Pastor Lukau’s church near Johannesburg, has been ridiculed and condemned by many.

“There are no such things as miracles,” the Commission for the Promotion and Protection of Cultural, Religious and Linguistic Communities (CRL Rights Commission) told South Africa’s national broadcaster.

“They are made up to try to get money from the hopelessness of our people.”

‘Tricked’ three companies
Three funeral companies who say they were manipulated by the “scheme” are now taking legal action for damage to their reputation.

“Alleged family members of the deceased” told the Kings & Queens Funeral Services they had had a “dispute with a different funeral service provider”.

BREAKING:  Today Is 10 Years We Had An Accident On N1 - Nana Ama McBrown Celebrates Life With Husband (VIDEO)

The customers also allegedly placed “Black Phoenix stickers on their private car” to look credible to Kings & Queens Funeral Services when they went to hire a hearse from them.

National debate
The coffin, the funeral directors say, was acquired from Kingdom Blue.

Pastor Lukau’s church, Alleluia Ministries International, has not responded to the BBC’s request for comment.

The Sowetan news site reports that the church has since backtracked on its resurrection claim, saying the “dead” man was in fact “already alive” when he was brought to the premises in Kramerville.

Pastor Lukau had only “completed a miracle that God had already started”, Alleluia International Ministries is quoted by The Sowetan as saying.

The BBC’s Milton Nkosi says the video has sparked a national debate on fake pastors and had been widely condemned by established religious groups.

However some South Africans have taken to social media with the hashtag #ResurrectionChallenge to see the funny side.