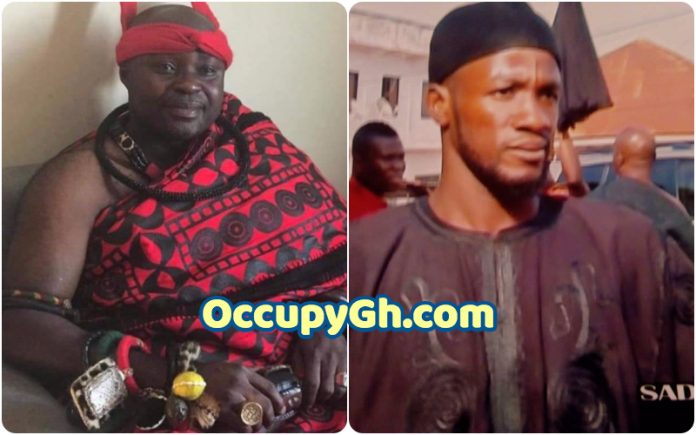 News privy to OccupyGh.com indicates that the businessman on Police wanted list in connection with the murder of Otumfuo’s Asamponhene Oheneba Kwadwo Aforduor has been arrested in Burkina Faso.

Alhaji Mohammed Sadat was reportedly picked up by Interpol on the border between Ghana and its northern neighbour and is expected to be delivered to Ghanaian authorities by Monday evening.

He was declared wanted by the Ashanti Region Police Command on the 22nd of August following the arrest of three individuals who were picked up to aid the police in investigations.

The body of the 46-year-old chief was found with multiple stab wounds lying in a pool of blood in his vehicle near Ebuom on the Ejura-Nkoranza Highway.

Smoke from his Toyota Land Cruiser vehicle drew some passersby to the scene as his assailants set the vehicle on fire ostensibly to destroy evidence.

Read:  Ivan Kituuka Was Caught Chopping A Married Woman & He Was Shot Dead

Some reports suggest that one of the last meetings the late Oheneba Kwadwo Aforduor attended was with the businessman who is suspected to be the mastermind behind the murder.

His sudden disappearance and subsequent turning off of his mobile phones heightened the suspicion of the police who have been on his heels till date.

December 8, 2019
Shatta Wale and Fella Makafui are the only two celebs who did not turn up at the Kempinski Hotel to meet Cardi B and...