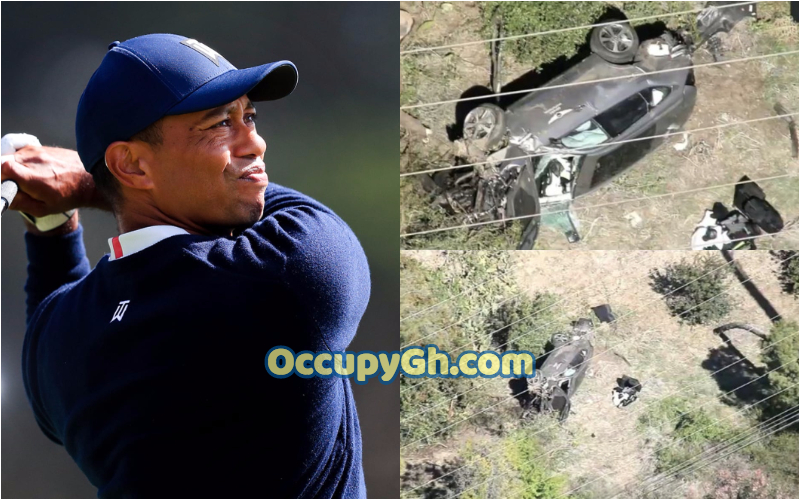 A piece of sad news reaching OccupyGh.com indicates that Tiger Woods has been hospitalized after being involved in a car accident.

The single-car accident happened in Los Angeles on Tuesday morning.

Woods’ vehicle was going north on Hawthorne Boulevard at Blackhorse road, on the border of Rolling Hills Estates and Rancho Palos Verdes, when it crashed and sustained “major damage,” the Los Angeles County Sheriff’s Department said in a statement.

Woods was the driver and the only occupant of the vehicle, the statement said.

“Mr. Woods was extracted from the wreck with the ‘jaws of life,’” the sheriff added.

He was rushed to a nearby hospital for treatment, the statement said. Woods’ agent, Mark Steinberg, told NBC News on Tuesday afternoon that Woods was in surgery for multiple leg injuries.

“We have been made aware of Tiger Woods’ car accident today,” according to a statement from the PGA.

“We are awaiting further information when he comes out of surgery. On behalf of the PGA TOUR and our players, Tiger is in our prayers and will have our full support as he recovers.”

Woods, 45, was in California for a two-day content shoot with Golf Digest/GOLFTV after serving as host for the PGA Tour’s Genesis Invitational over the weekend.

Pictures surfaced on social media of Woods smiling with Dwayne Wade and David Spade at Rolling Hills Country Club on Monday, but with his movement still restricted, he did not hit balls or play any holes.

In this article:Accident, Tiger Woods, USA